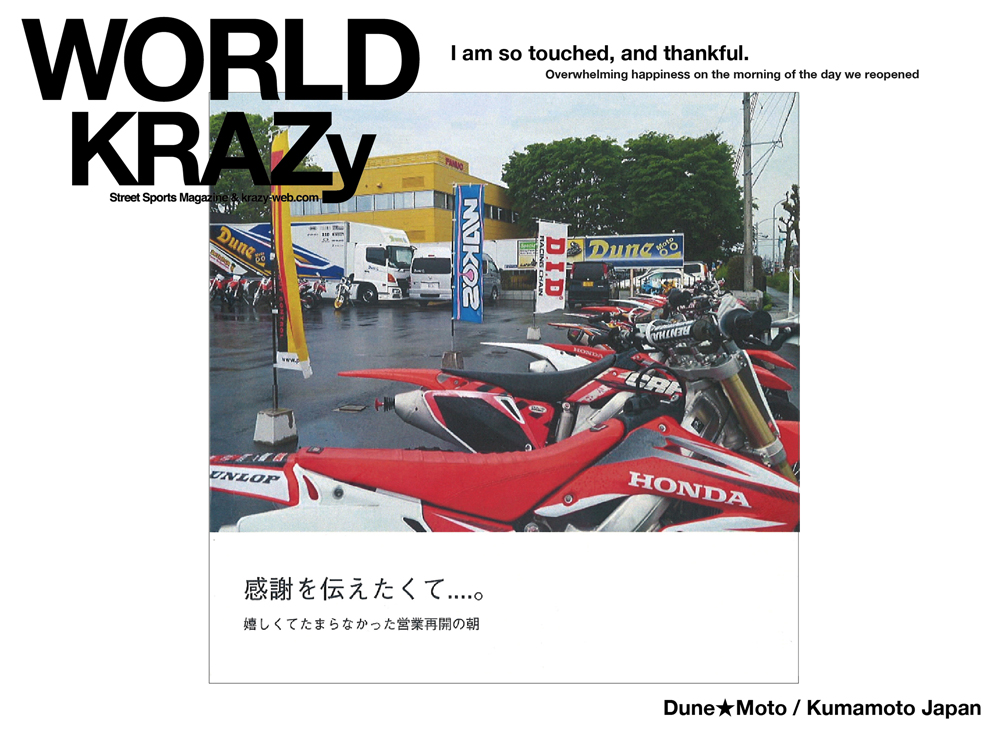 Kumamoto is known as the area that is home to Honda’s main factory of 2 wheel motorcycles.Motorcycle culture is rooted in Kumamoto with a serious road circuit and motocross course.Motorcycle shops in Kumamoto were damaged by this earthquake.But fortunately it was less damage. And those were the places the people who enjoy motorcycles gathered around.

This time a book about the story then was published.This book was meant to show appreciation to everybody who supported them.Today we are going to introduce a part of it.
The name of motorcycle shop is Dune★motoThe main characters are the owner Yoshifumi Kawakami and his wife Mutsumi and their two motorcycle buddies.


Yoshifumi Kawakami is a top rider that’s joined Supermoto Japan.
And former WGP champion Hiroshi Aoyama who joined the Supermoto Japan final round
is the one of the buddies.

‘I am so touched, and thankful.’
Overwhelming happiness on the morning of the day we reopened. 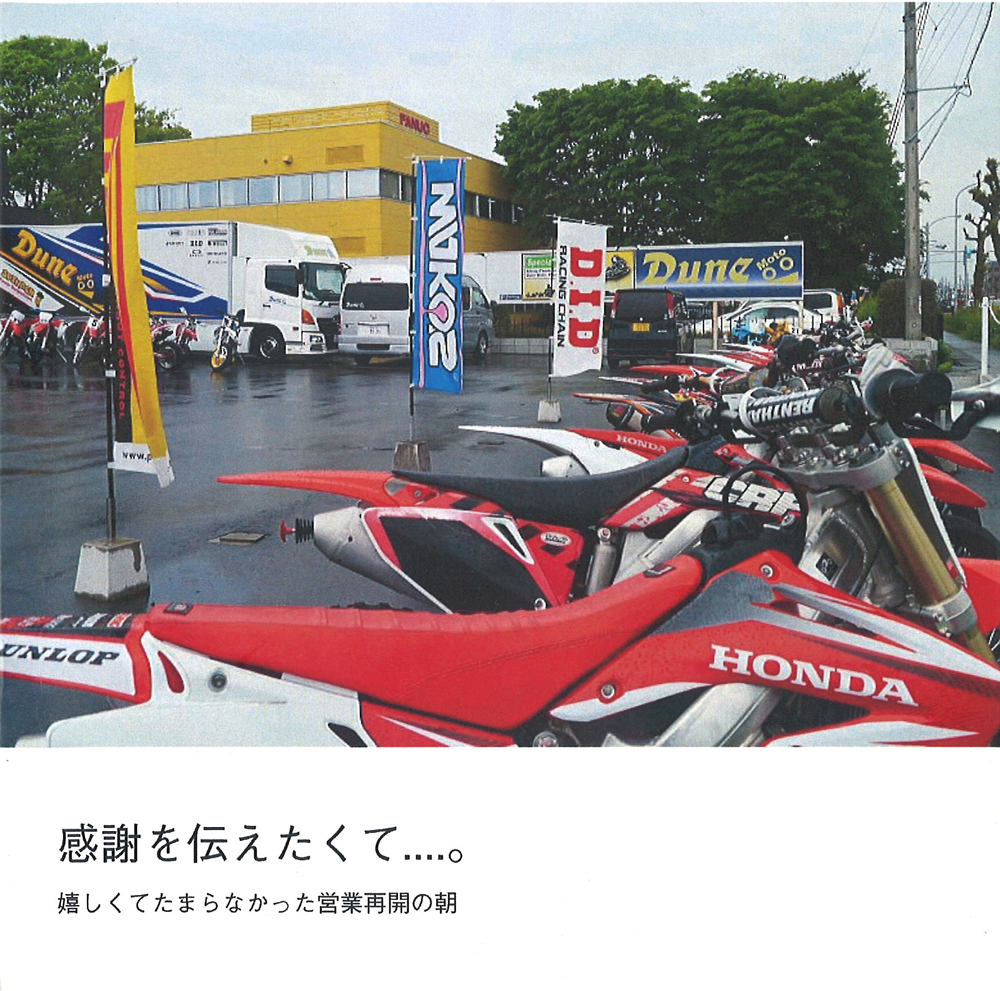 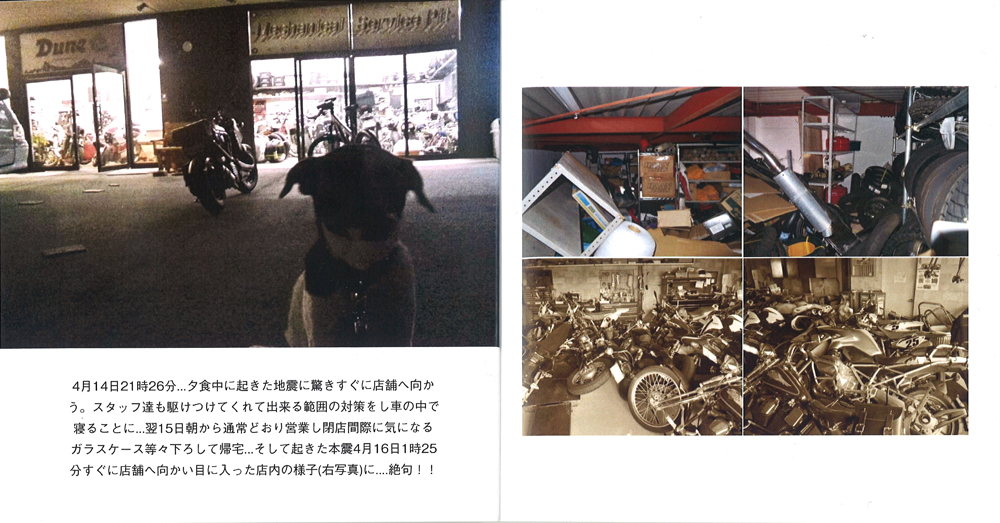 April 14th 21:26
I was surprised by an earthquake that occurred when we were having dinner and went straight to my shop.
Our staff came to the shop and we did all we could do to measure the earthquake damage and decided to sleep in the car.
On the next day we opened in the morning as usual and moved glass showcases that we thought might break and then left.
The main shock occurred on April 16th 1:25
I went to the shop immediately, and I was speechless when I saw how the inside of my shop looked like. 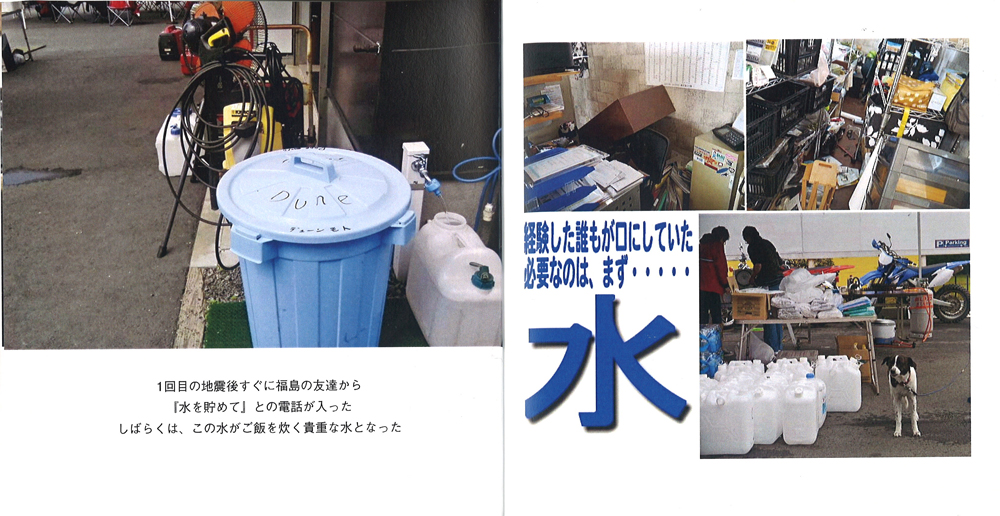 I got a phone call from my friend in Fukushima (Fukushima was damaged by a large earthquake in 2011) and he told me to “save up your water.”
That water became valuable and we used it to cook rice for a while. 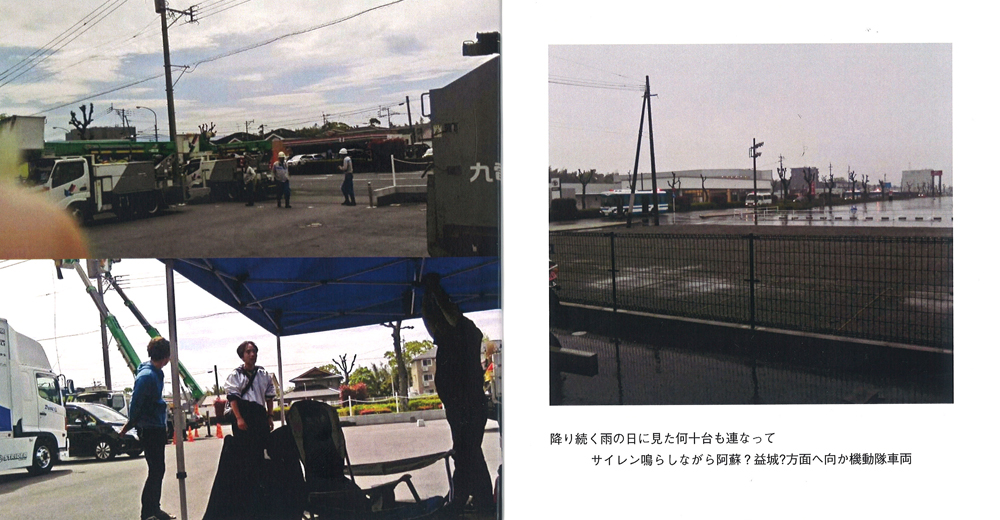 I saw dozens of vehicles of riot police going to Aso? Mashiki? Areas with blowing sirens. 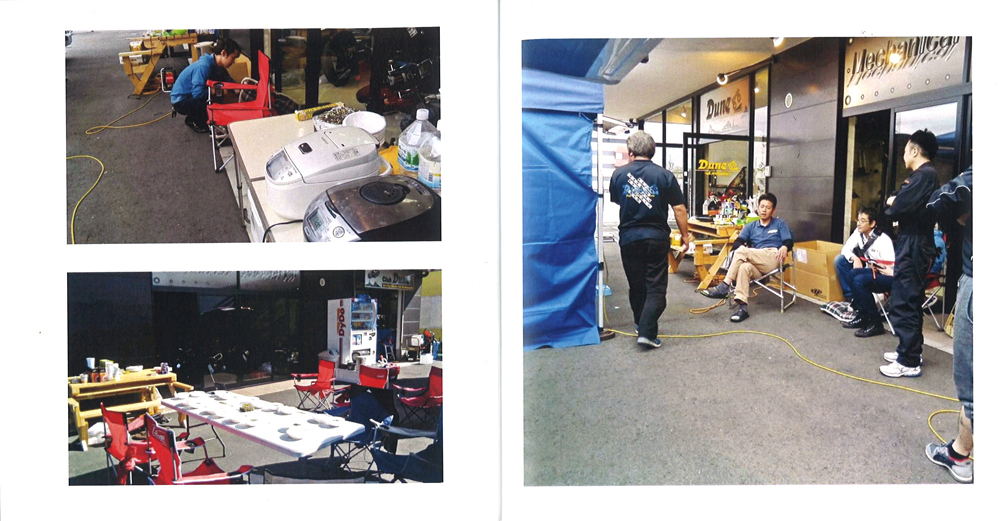 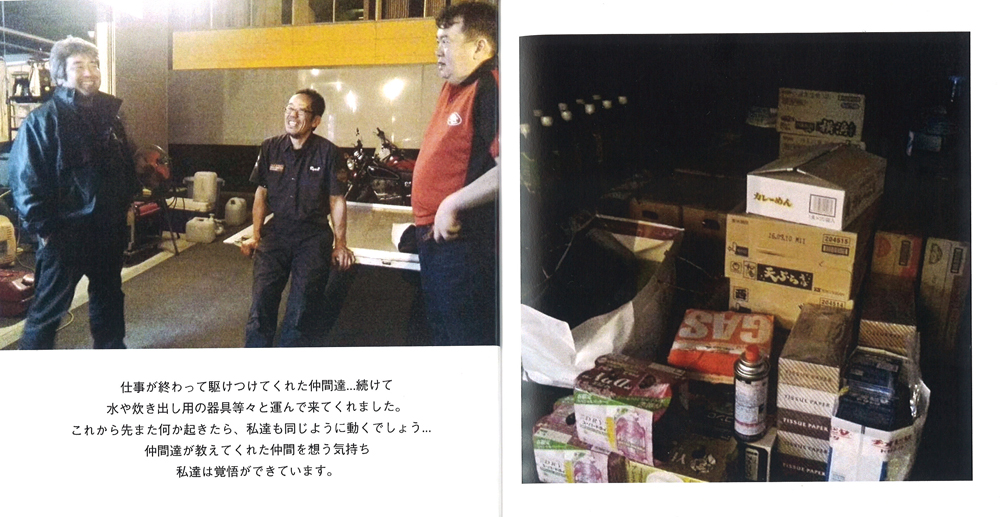 My buddies came right after their work.
They brought water, hot meals and more.
We definitely would do the same if something happened in the future.
They taught us kindness for other people.
We are determined. 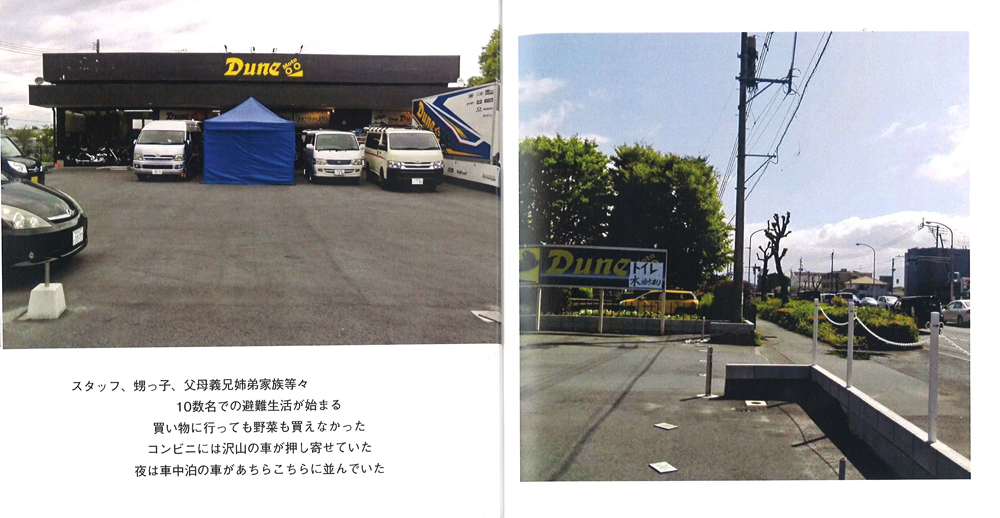 Our life in an evacuation shelter with over 10 people which included staff, cousins, father, mother, sisters and brothers, had started.
Going shopping, we couldn’t buy even vegetables.
So many cars were coming to convenience store.
Cars with people sleeping inside were everywhere at night. 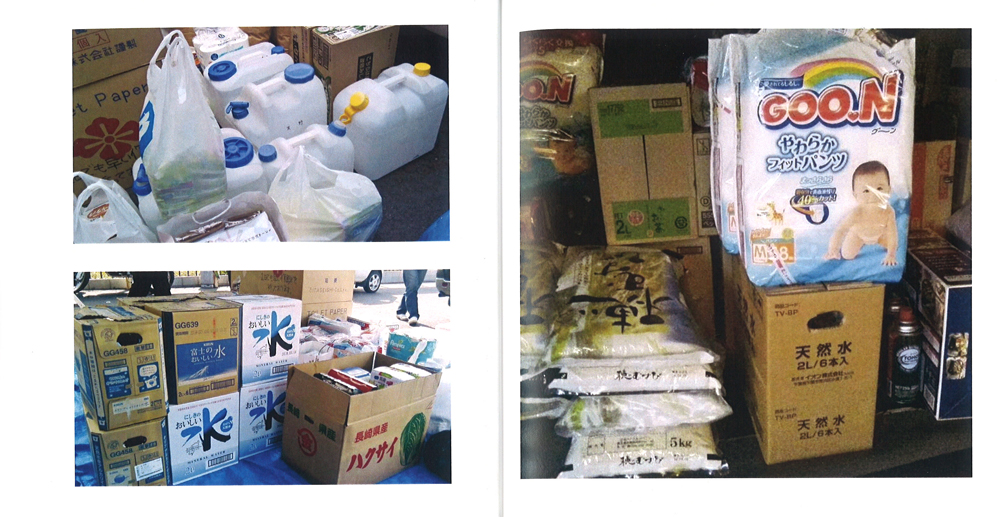 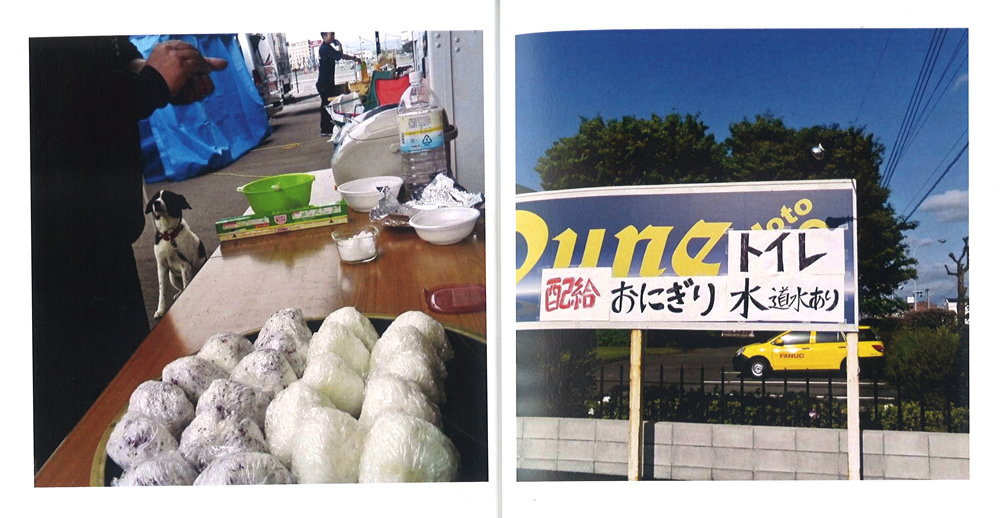 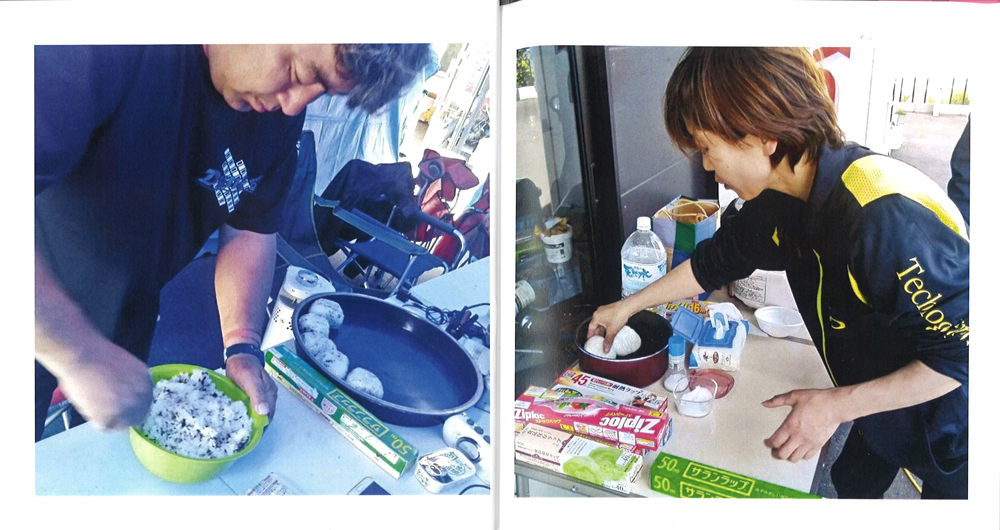 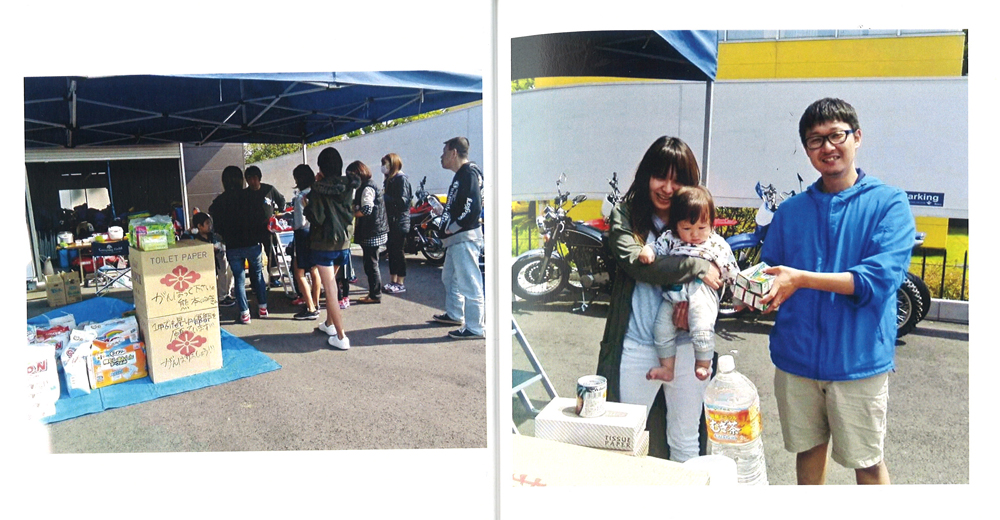 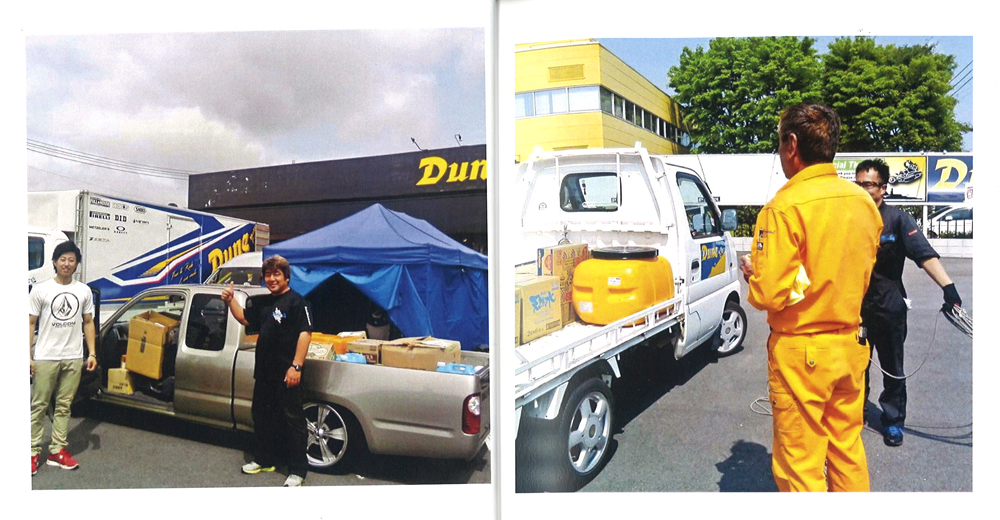 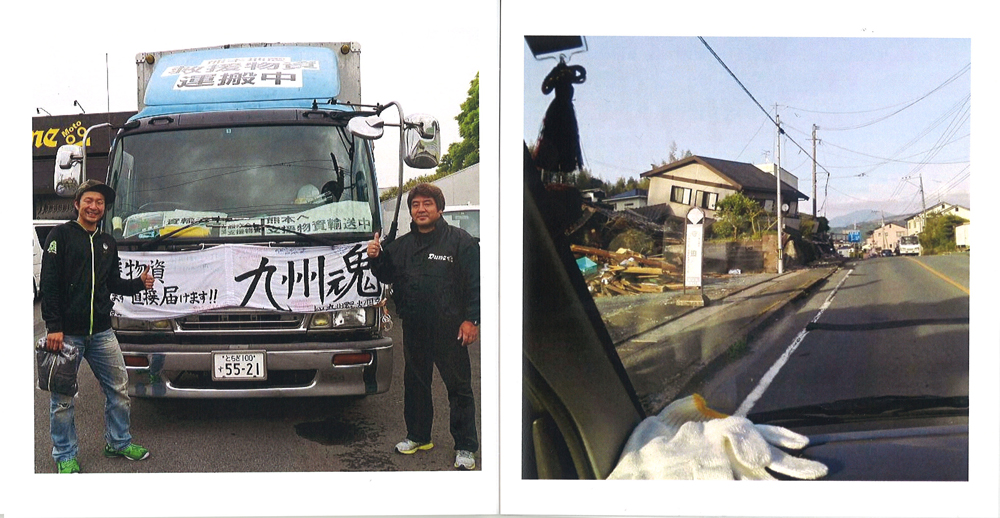 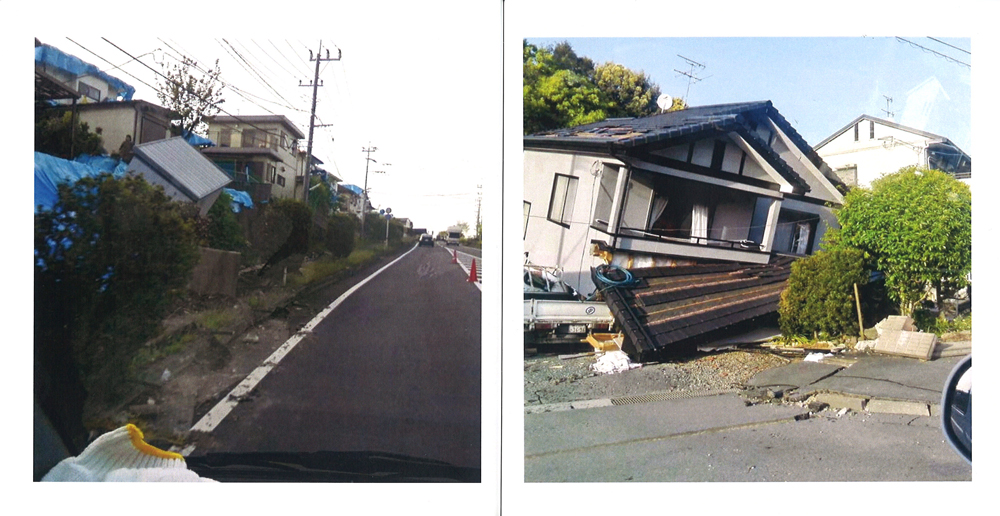 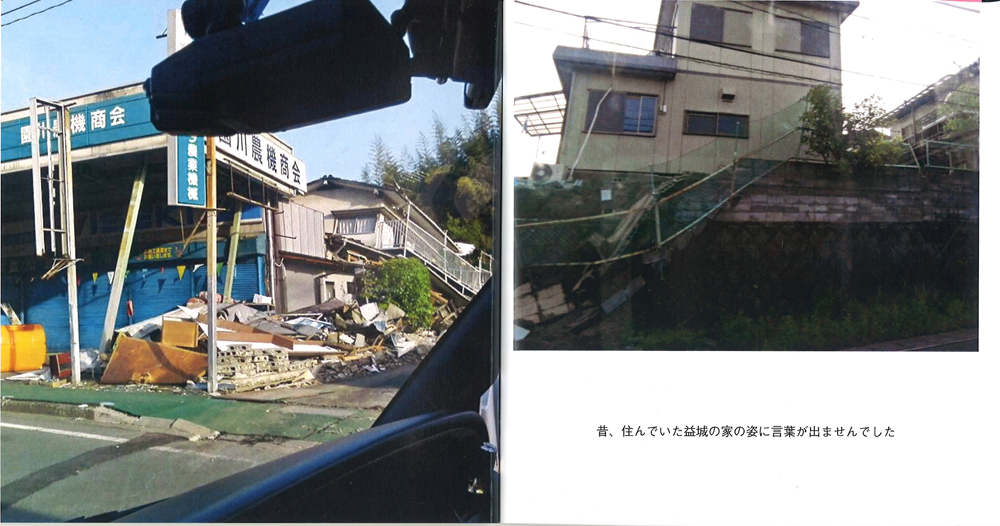 I was speechless because of how my old house looked like now. 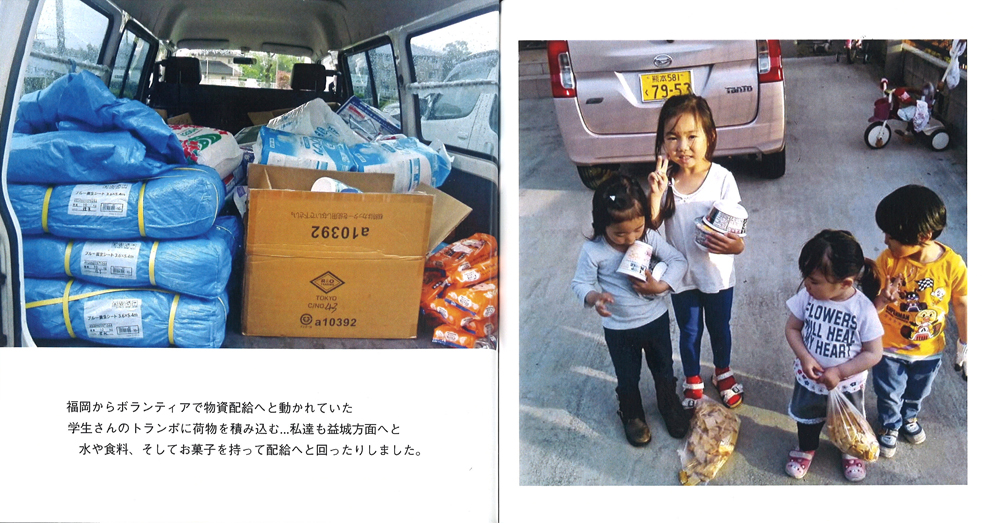 We put our stuff into a student’s car who came from Fukuoka as a volunteer and had been rationing goods.
Then we went to the Mashiki area.
We brought water, foods and snacks then went to distribute them. 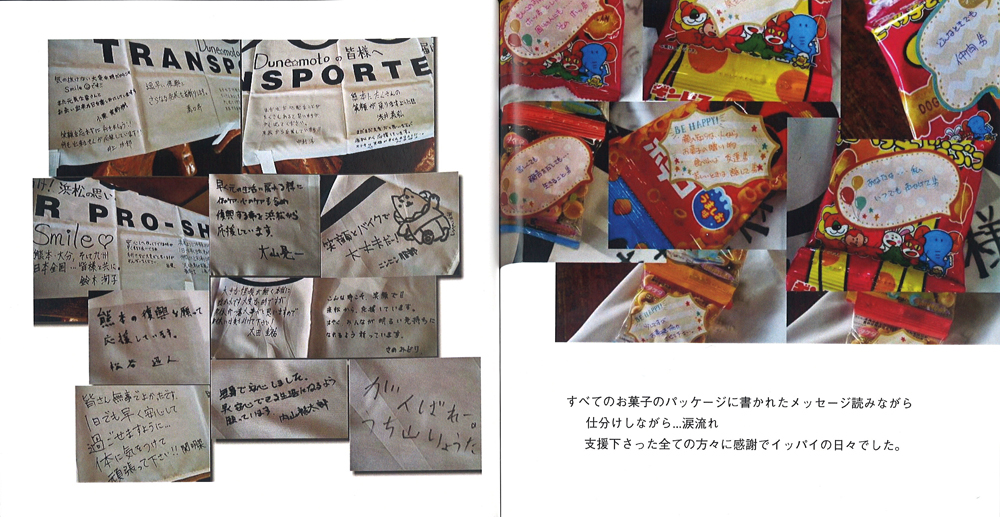 I was crying while organizing the snacks and reading the messages all over them.
Everyday, I was so thankful for all the people who supported us. 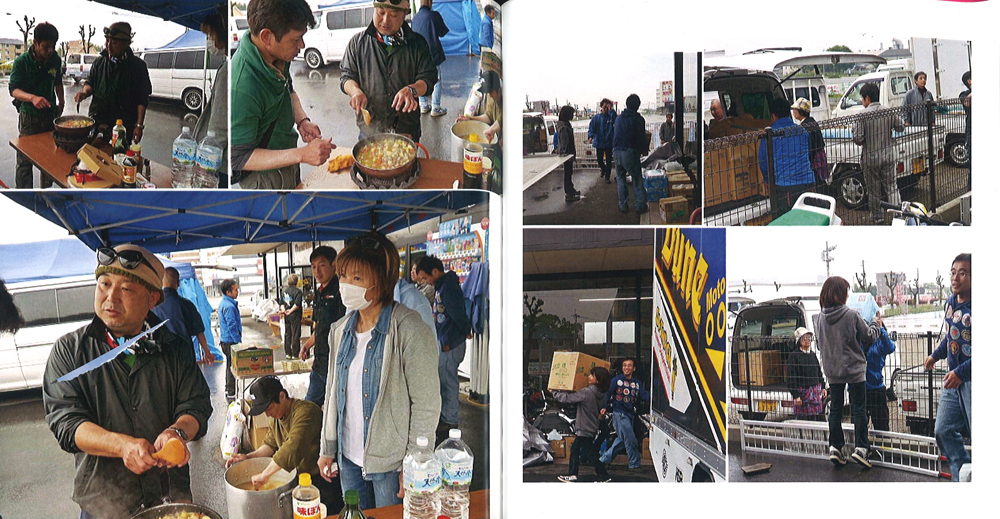 This picture was taken in the morning of the day we reopened.
I could line these motorcycles up like this.
I was overwhelmed that we could reopen.
We never struggled to get goods because of our friends moved so quickly and so many goods were delivered from all over Japan.
We started to distribute these supplies without thinking and met a lot of people that had been suffered by earthquake.
And that experience made me think I’m glad that I did it and to my best to live to the fullest.
Thank you for all your support.
We were busy with work and events from the day of earthquake to 10 days after we moved to evacuation shelter, until the the day we reopened.
I’m writing this in November and the struggle start fading as we back to a normal life and being busy on daily basis.
But that appreciation that I felt back then never left my heart.

To all the people who supported us.
I’m sending this book to show my appreciation.
If you ever have a chance to visit Kumamoto please feel free to stop by.
Thank you so much.
2016 November 14th Dune★moto owner Yoshifumi Kawakami 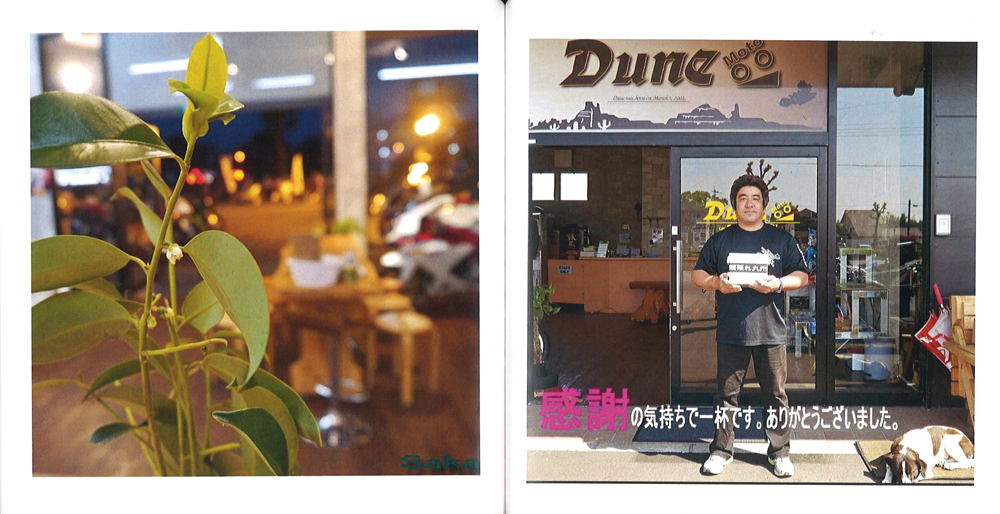 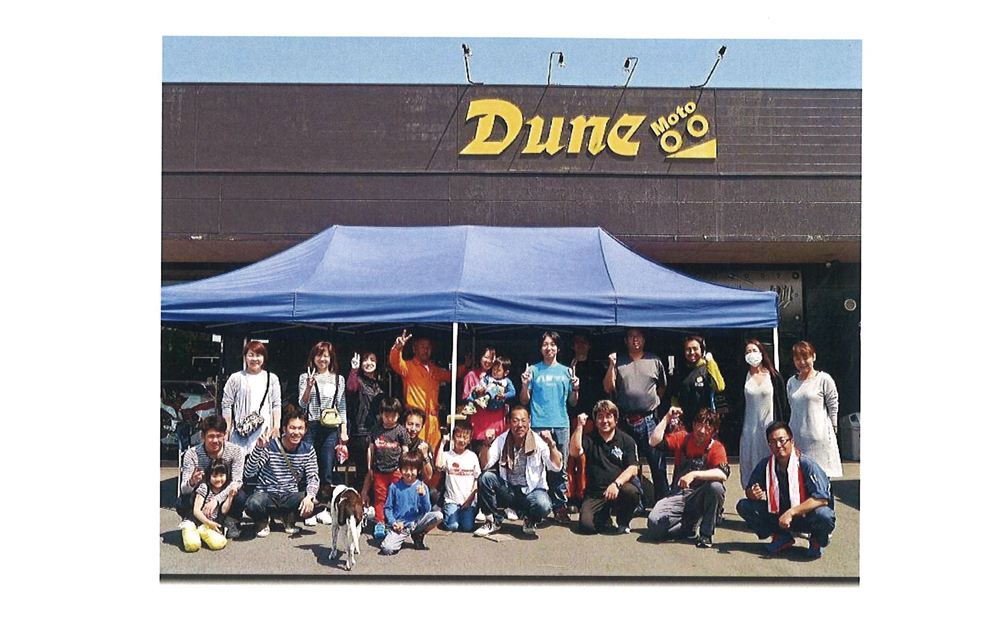 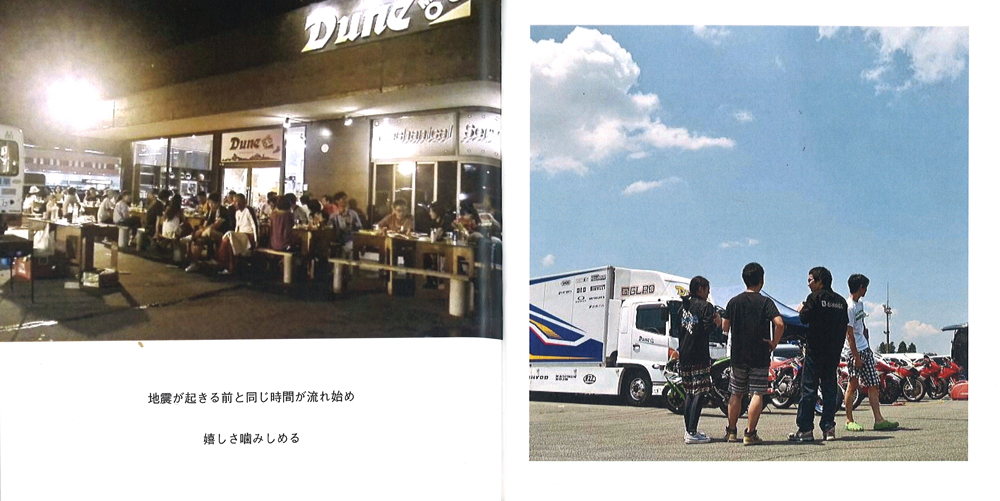 We put the rest of the relief goods in our shop track and went to the Aso area that requested our help.
It was the day, ending the first chapter for us.


If you have any question feel free to shoot an email to kondo@kondo-design.jp
We here at “KRAZy” are particular about sending information.
We generate revenues from advertisements and the sales of goods because we want future motorcycle fans and future mortar race fans to look up this website.
It would be nice if you buy our merchandise once a year to help us continue this website.
We sell merchandise 4-5 times year online only.
We think the next sale will take place be in May after Golden Week.
Publication supervisor: Masayuki Kondo