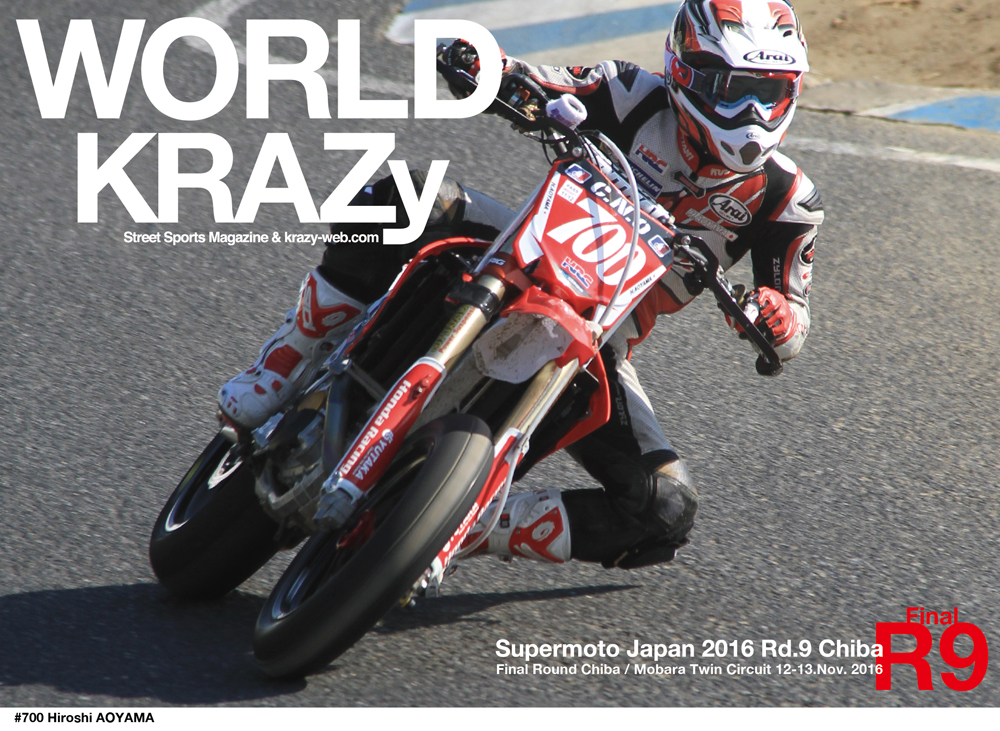 Hiroshi Aoyama is an internationalrider who participated in the FIM Road Racing World ChampionshipGrand Prix representing HRC where he grabbed victory and kept fighting in MotoGP.
He is now a test rider for HRC.
This autumn he covered for Pedrosa in the Japanese round of MotoGP.
In Chiba, Aoyama participated in Japanese Supermoto which was the final round of SupermotoJapan that was held on November 12th and 13th. 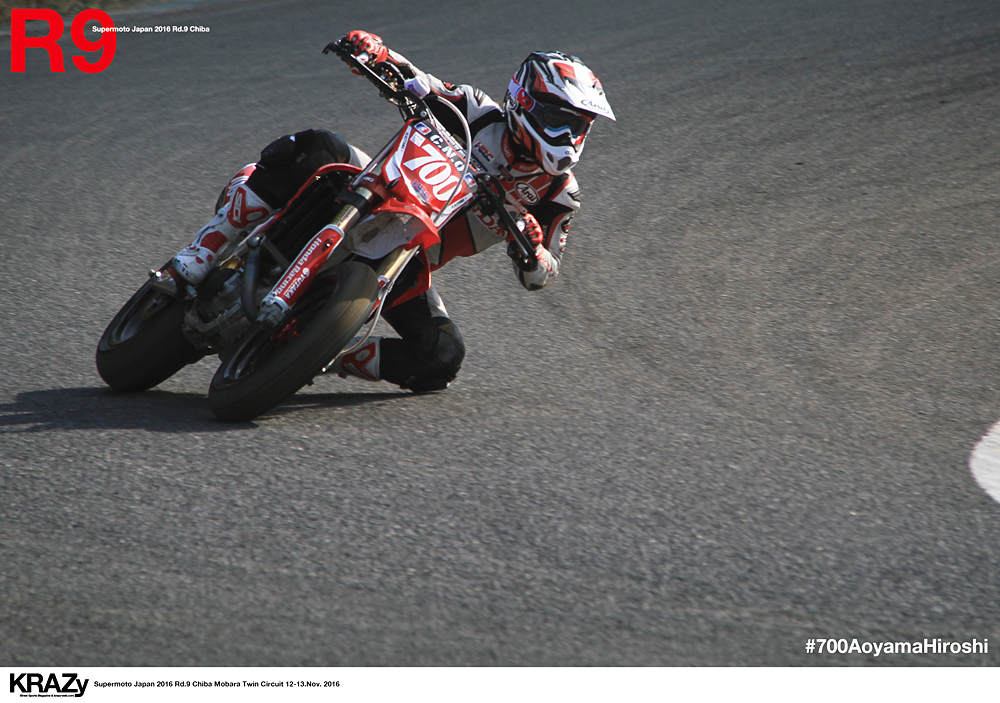 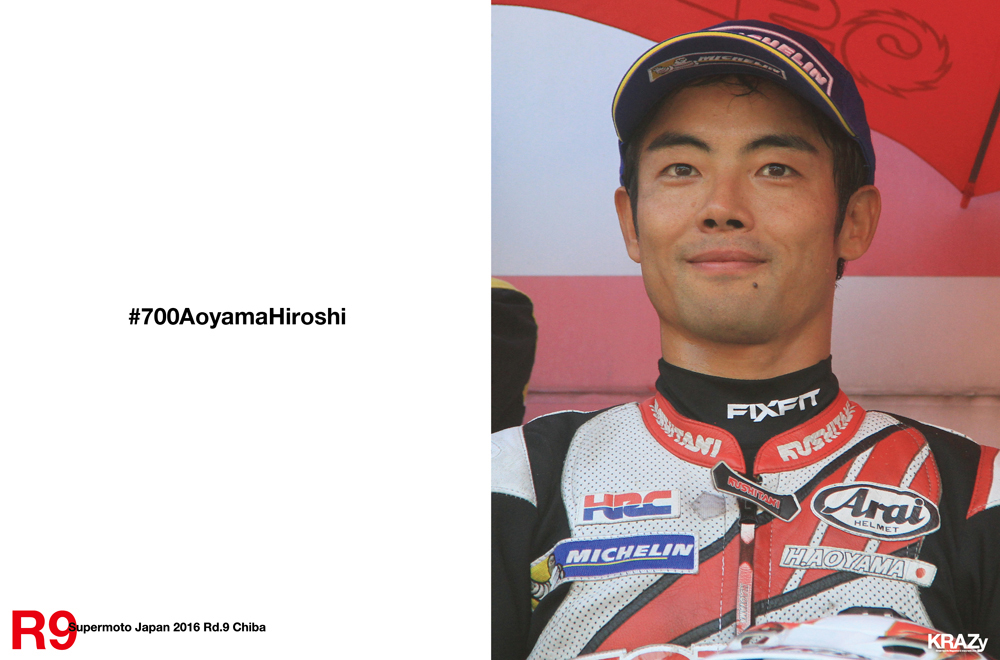 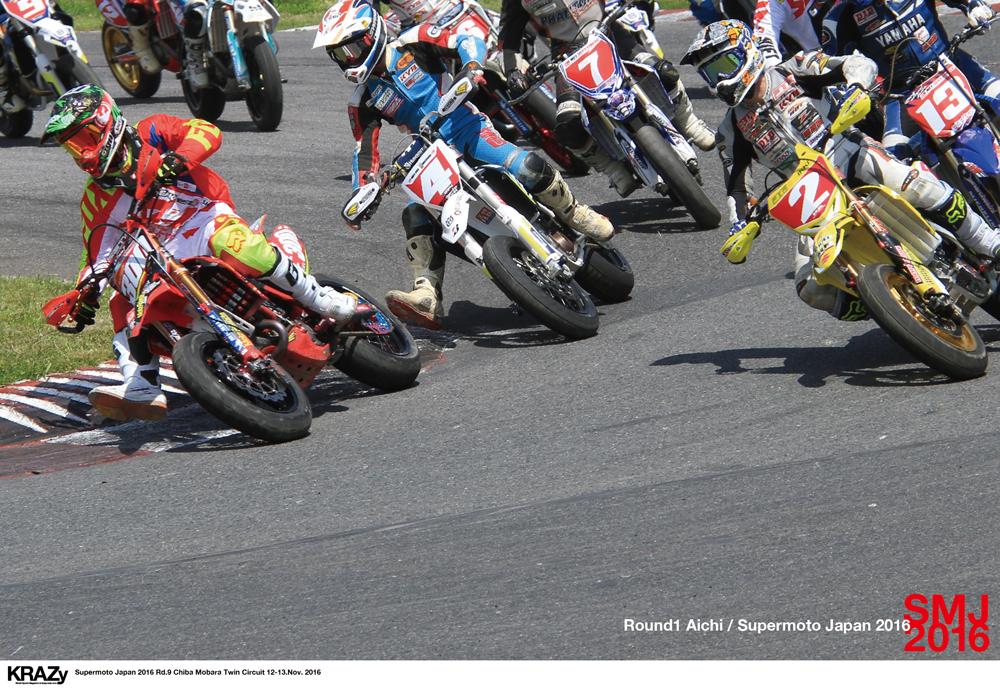 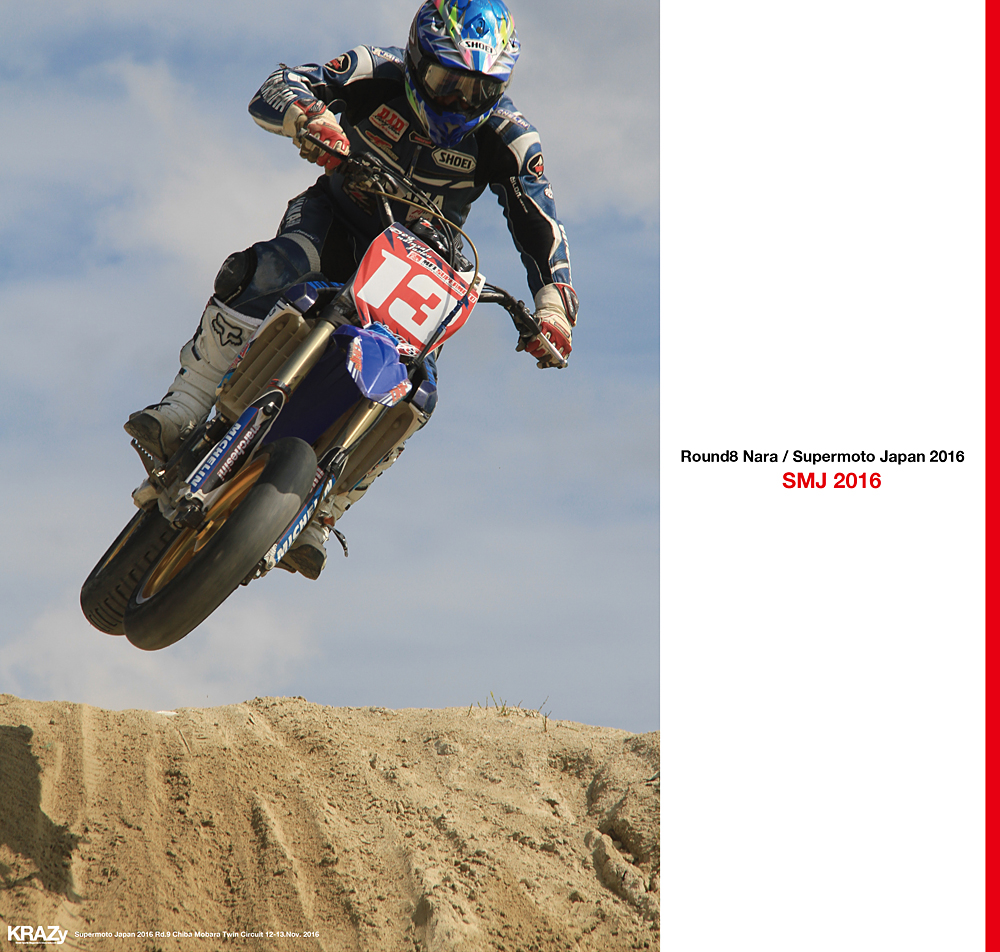 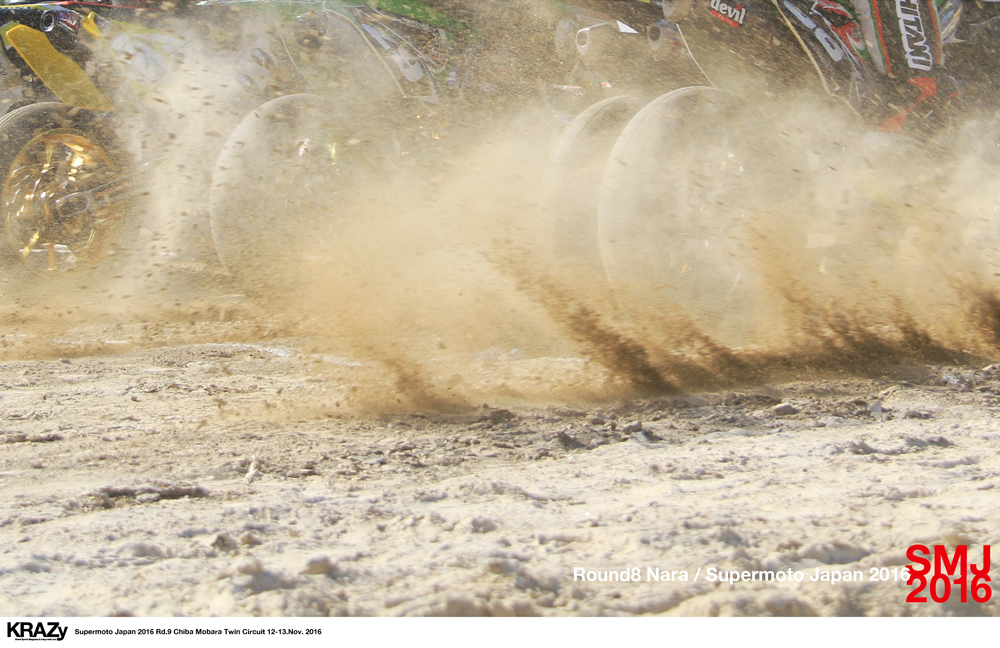 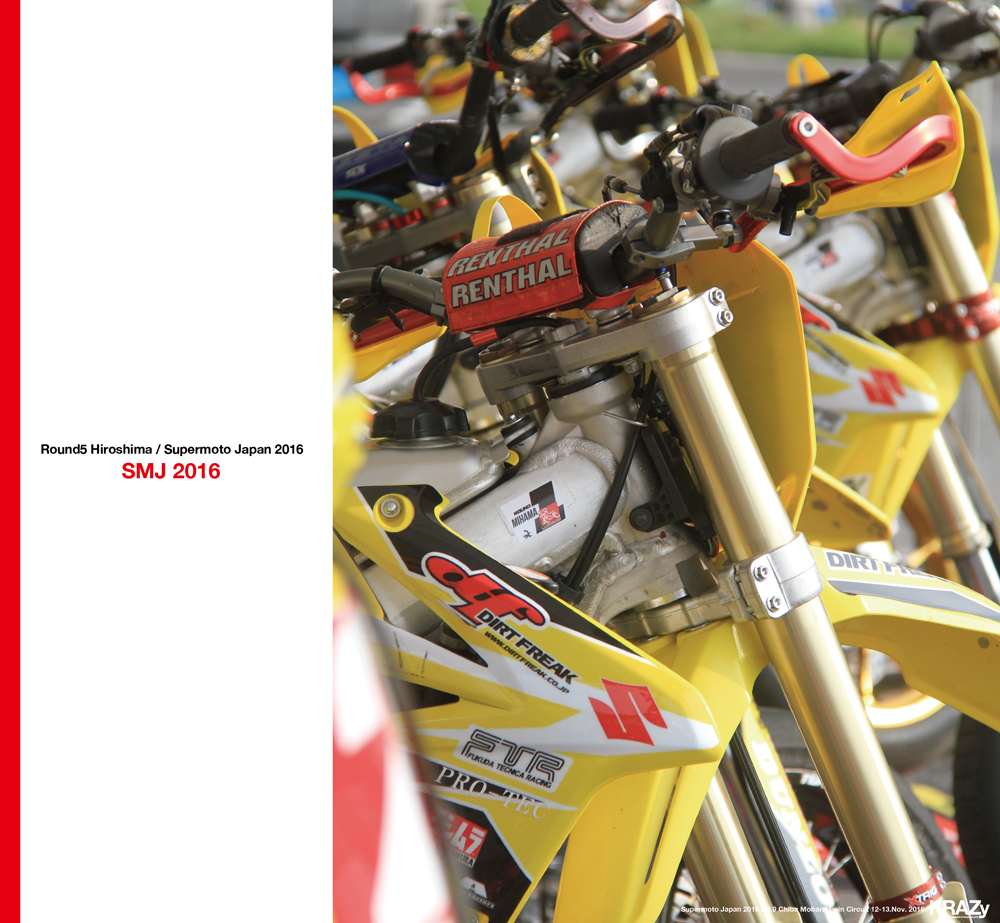 This year S1 PRO became a battle of a veteran rider #2 Ikki Moriraand 19 year old rider #4 Makoto Arai. There were many intense battles by these two in several rounds.
Finally, however, #2 Ikki Morita became the 2016 champion at the previous round in Kumamoto. 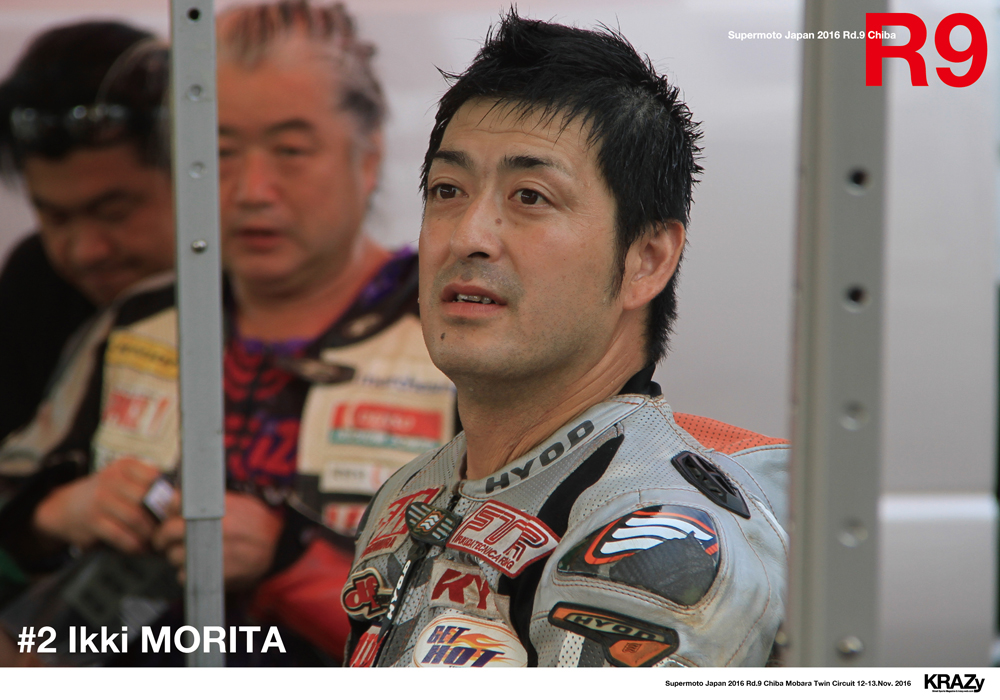 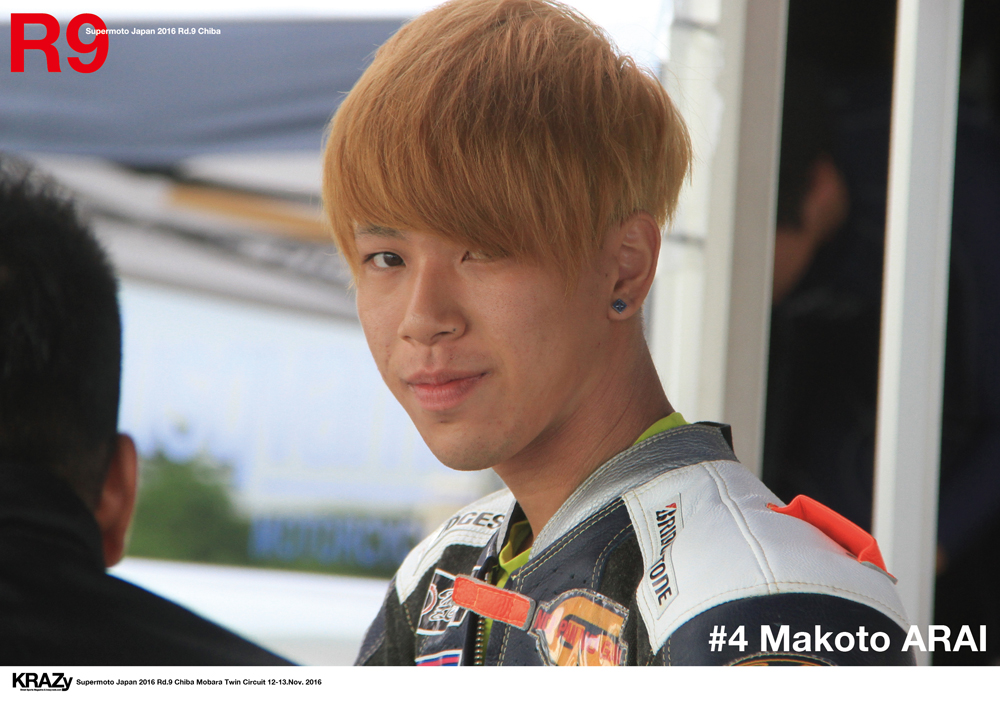 We expected it was going to be the battle of these two Supermoto top riders and world champion Aoyama.
Our thoughts were,
“Well I bet Hiroshi Aoyama is going to win because the dirt section is short and the most of course is asphalt section this time. The only part that I was concerned about is course itself is shot and has no high-speed corners that Aoyama is good at.”
“No! EvenAoyama can’t win that easily. It has dirt section and Supermoto riders are fast too. In the first place, the foundation of motorcycle is a motocross machine and has a different suspension. I think this type of course is the one #4 Makoto Arai is good at. So it’s going to be a battle of #4 Arai and #2 Morita. Well I hope it will be. 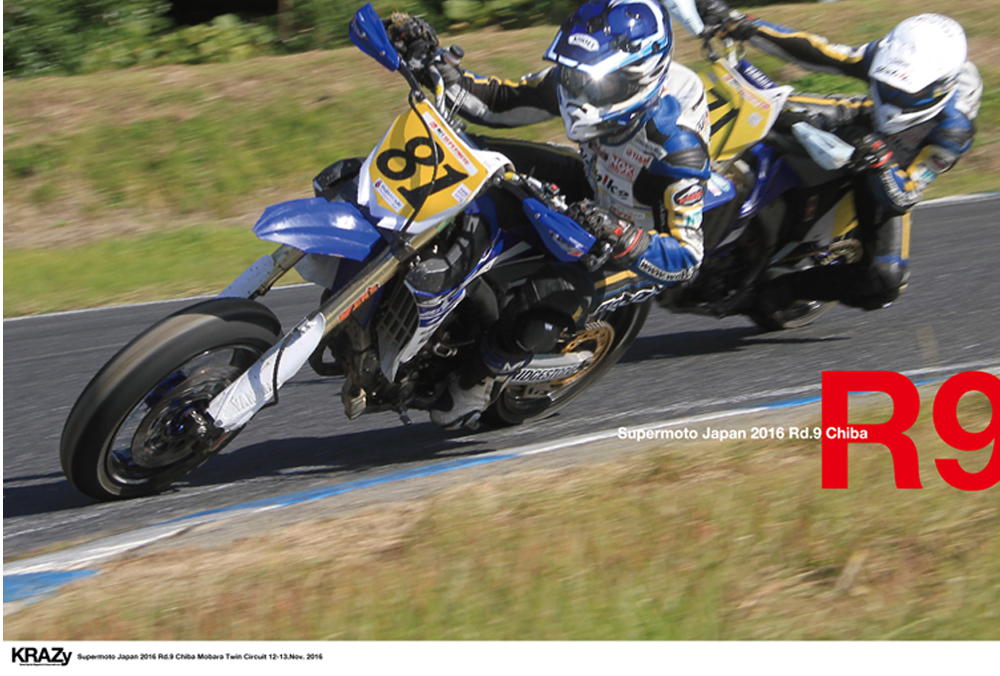 Many road race riders participated in Japanese Supermoto. And #81 Takumi Kamidawa and others joined the S2 class in this final round.
But only Kouta Nozane whosesuccessful JSB1000 won S1 PRO once.
We all were paying attention to what type of ride Aoyama was going to show us from the test rideon Saturday. 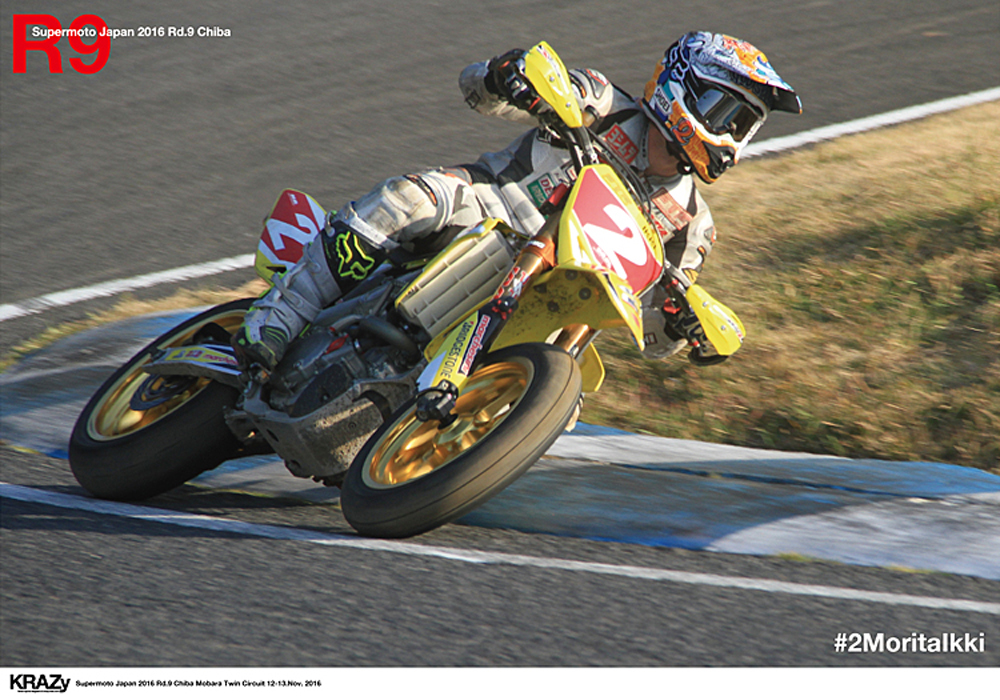 Race 1
#2 Morita grabbed the holeshotthen #4 Arai and #700 Aoyama were after him. It turned into a high-speed battle by these three from the beginning.
But young rider #4 Arai slipped and fell back to the end.
Now it became Supermoto veteran rider #2 Morita vs Worldwide rider #700 Aoyama.
#2 Morita kept taking the lead with high speed and #700 Aoyama chased him maintaining a distance that he was able to attack.
I guessed if he were going to attack it would happen while entering the last corner to the home straight which is a high speed area.
After watching these two riding yesterday, it like felt Aoyama did not join the race normally; he really wanted to win. 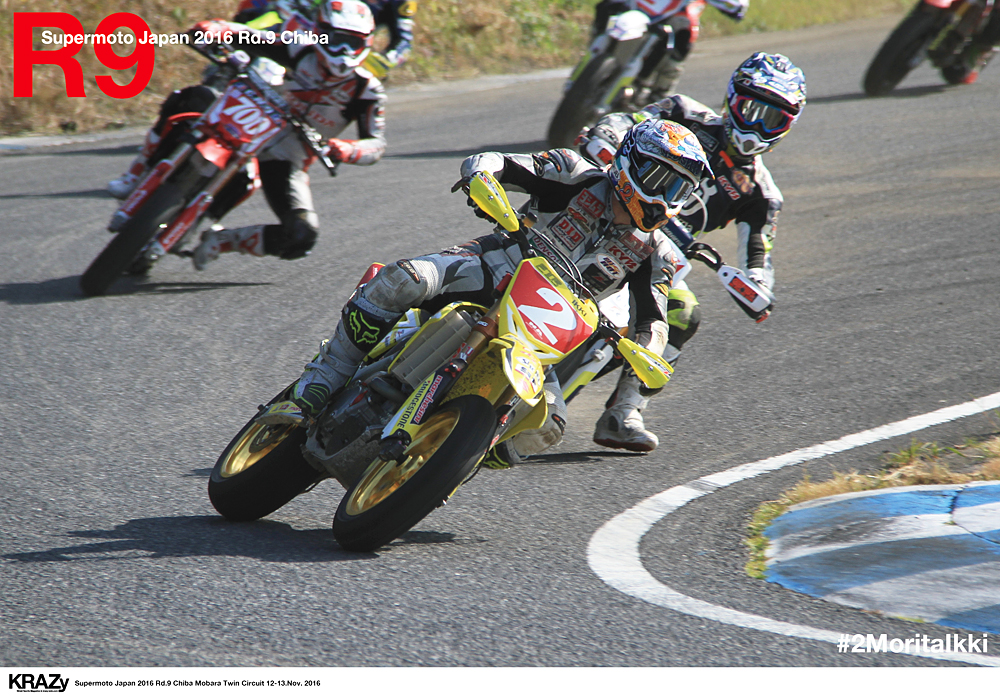 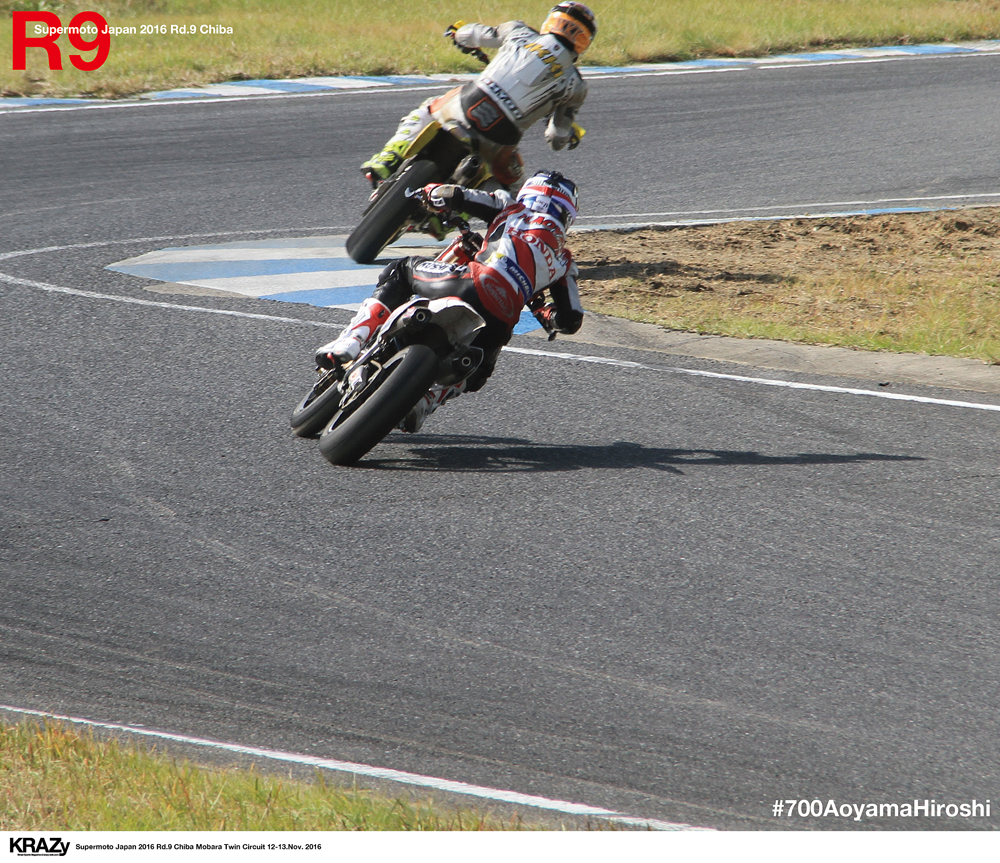 But I guessed wrong.
#700 Aoyama start getting outpaced by #2 Morita.
Is he struggling with riding in the area after the dirt section that has dirt on asphalt ?
#2 Morita said,
“This time the dirt section is not there. It’s 3~4 corners after the dirt area that has dirt on asphalt.
I’m faster than Aoyama at this. I am going to win tomorrow!”
In the end #2 Morita distancedhimself slowly from #700 Aoyama and won, showing his pride of aSupermoto Japan Champion.
#700 Aoyama placed 2nd. #4 Arai came back from the worst place and placed 6th. 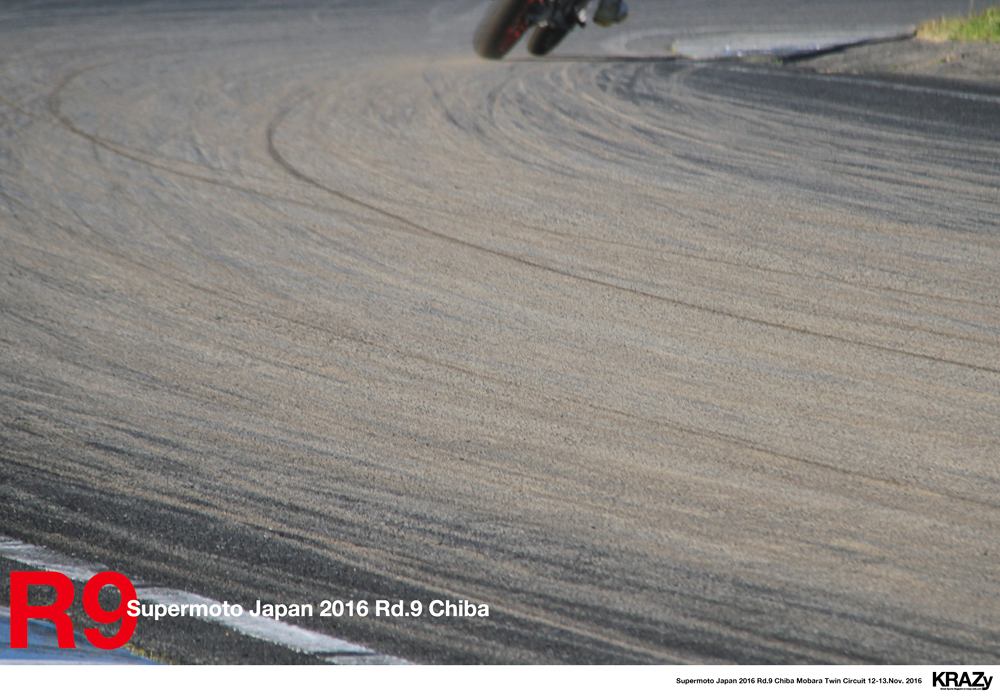 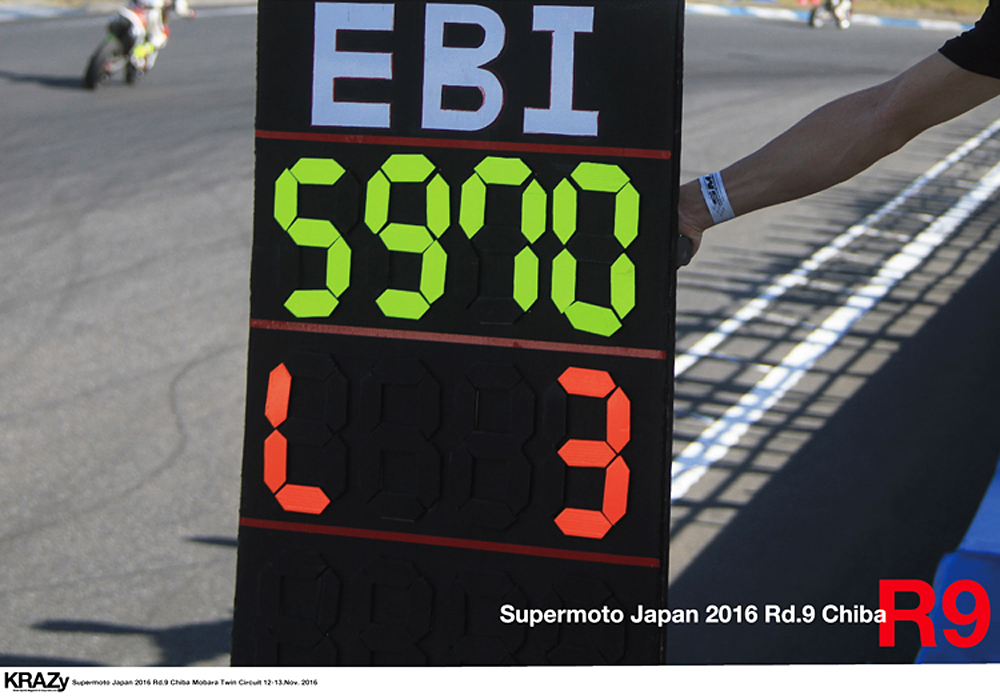 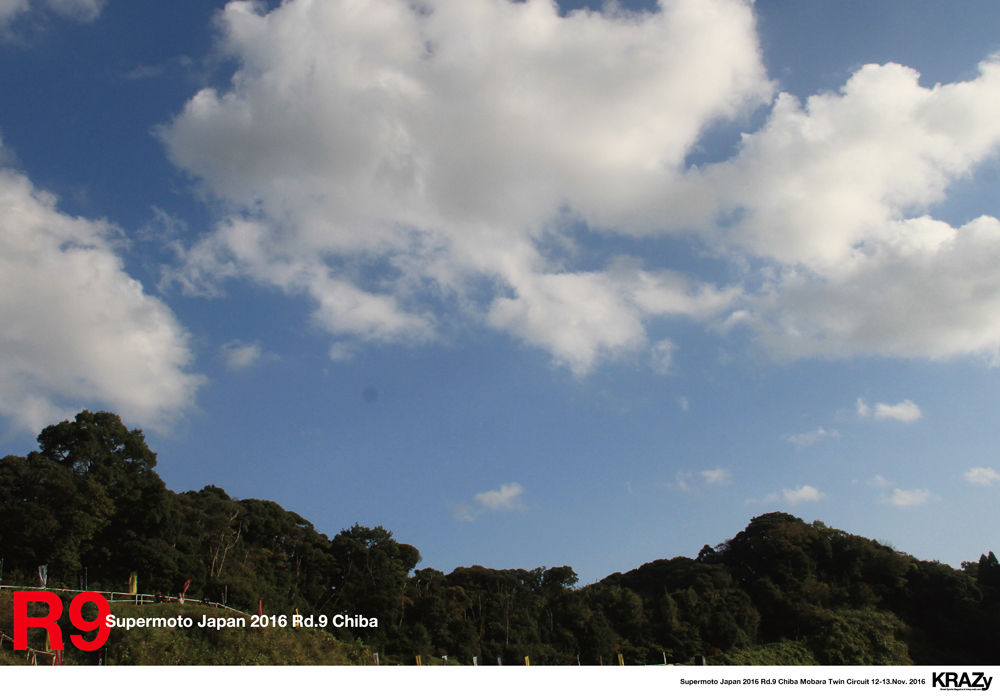 Race 2
Just like Race 1,#2 Morita grabbed the holeshot and then #4 Arai and #700 Aoyama were after him.
But #4 Arai’s riding was different this time.
In the beginning these three kept riding like a pack.
But #700 Aoyama start getting outpaced by the other two.
In the middle of race it became a battle between #2 Morita and #4 Arai completely.
#4 Arai was right after #2 Morita.
It was like I could hear him screaming, “I want get in front of him! I’m faster than him!” But he seemed to be hesitating somehow. Maybe he can’t be unreasonable? 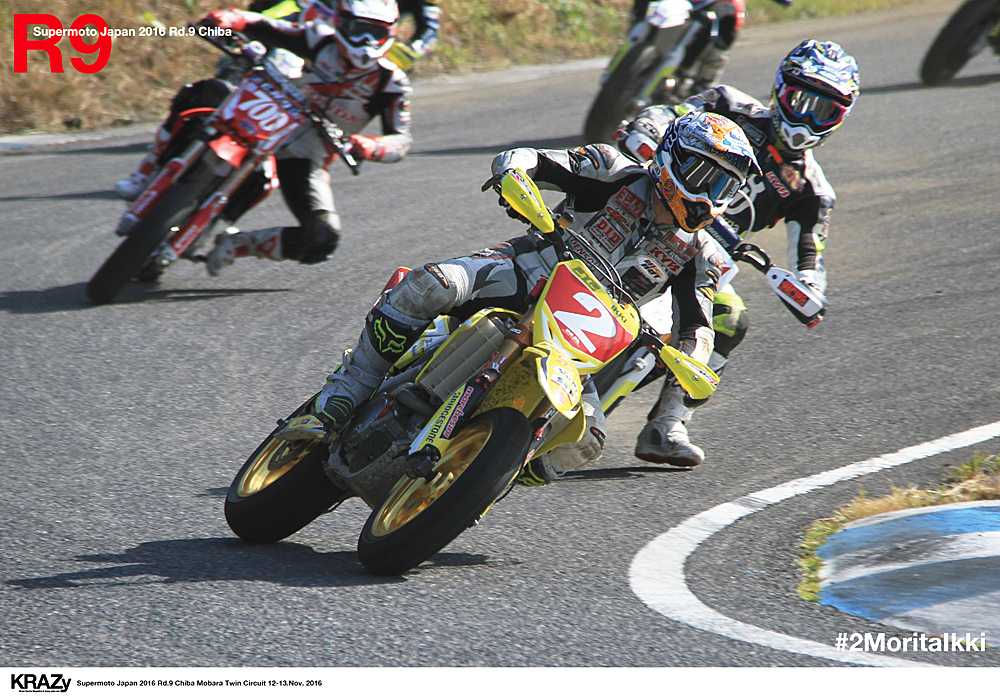 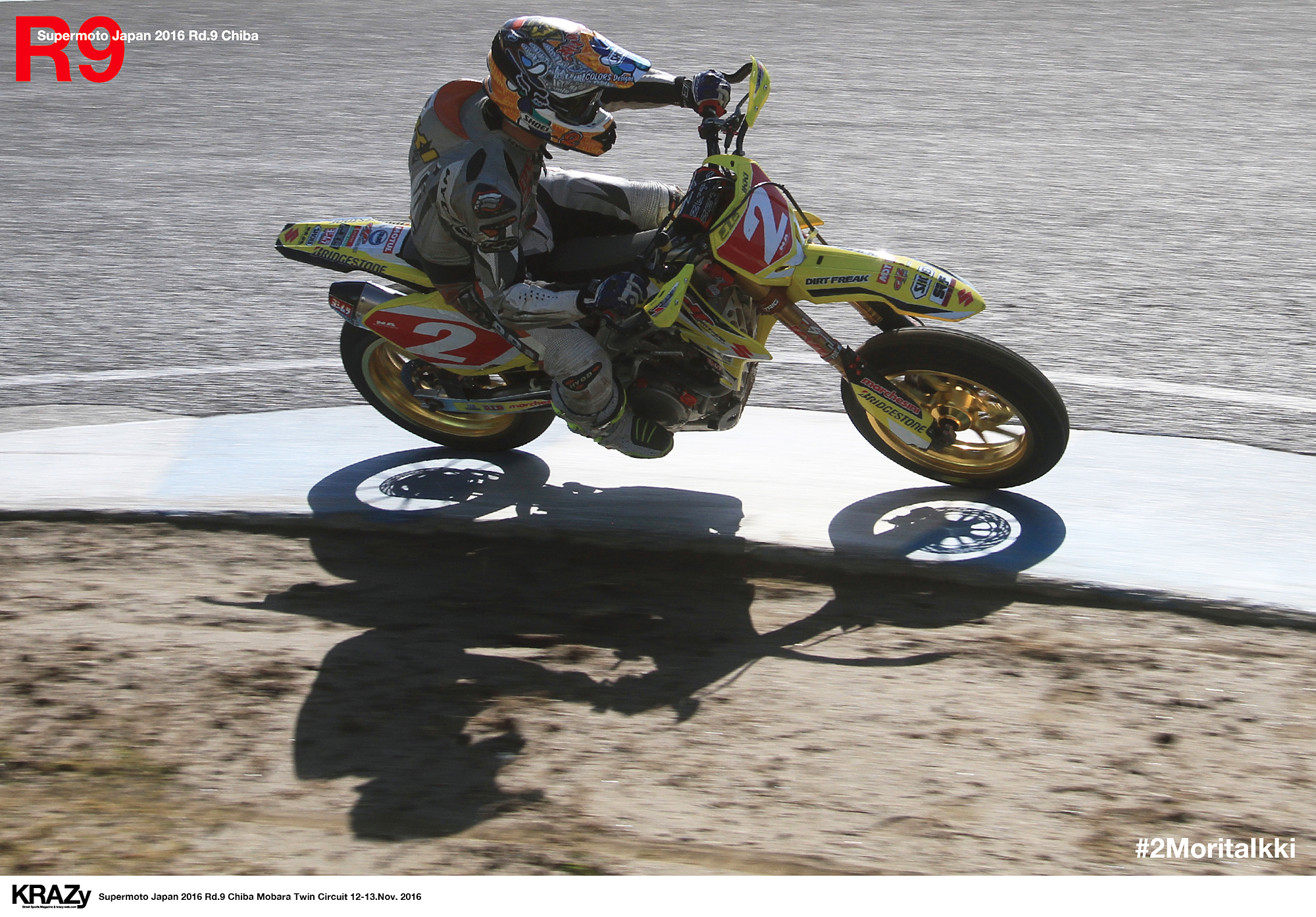 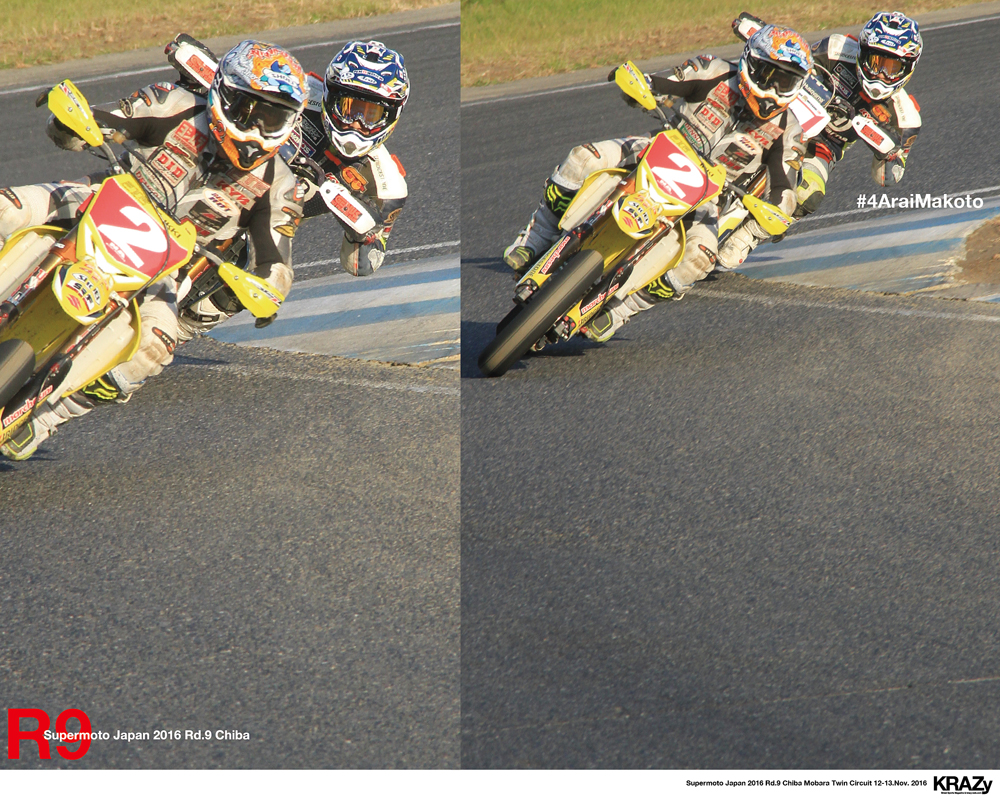 And #2 Morita seemed to care about his best riding more than winning as he was entering with the best line and not going inside to block Arai.
#2 Morita kept riding with his fastest line even though he could have been passed by Arai. This is great part of his character.
It became an insane battle just as in the Hiroshima round. 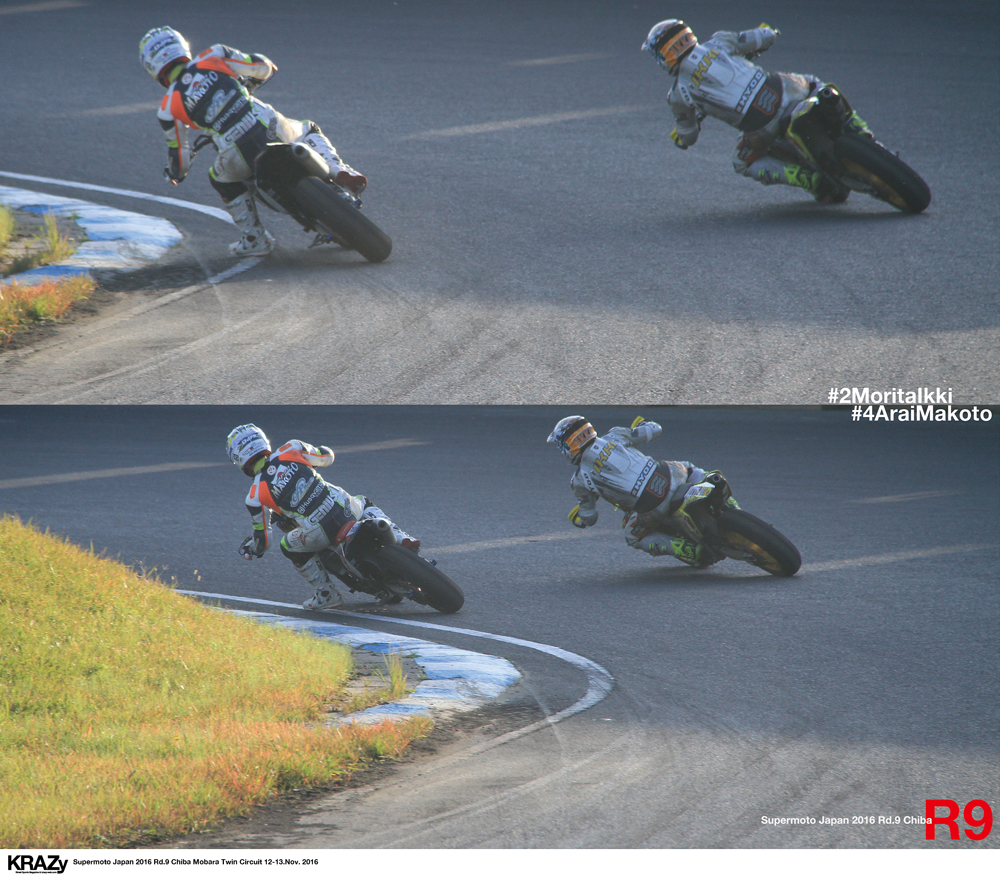 And finally #4 Arai made a move in the last corner on the final lap.
Entering the corner between the edge and #2 Morita.
But he could not cornercompletely.
Morita turned quickly and accelerated, moving in front of him.
Well #2 Morita was faster.
His SUZUKI machine was the one that got checkered flag first. 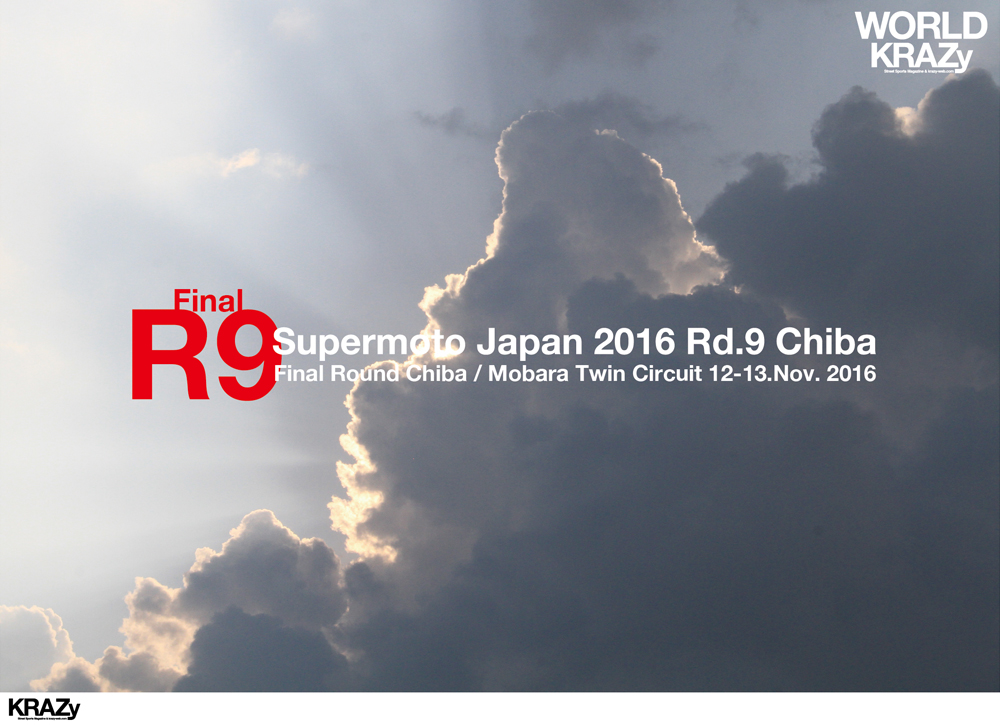 “I’m going to wear #1 next year. I’m going to show you all some great riding!
I really appreciate KRAZy for watching us this whole time.
I’m going to show some riding that will be on the KRAZy race report next year too. Thank you so much!”
#2 Ikki Morita/Team SRF MIYAGI & FTR 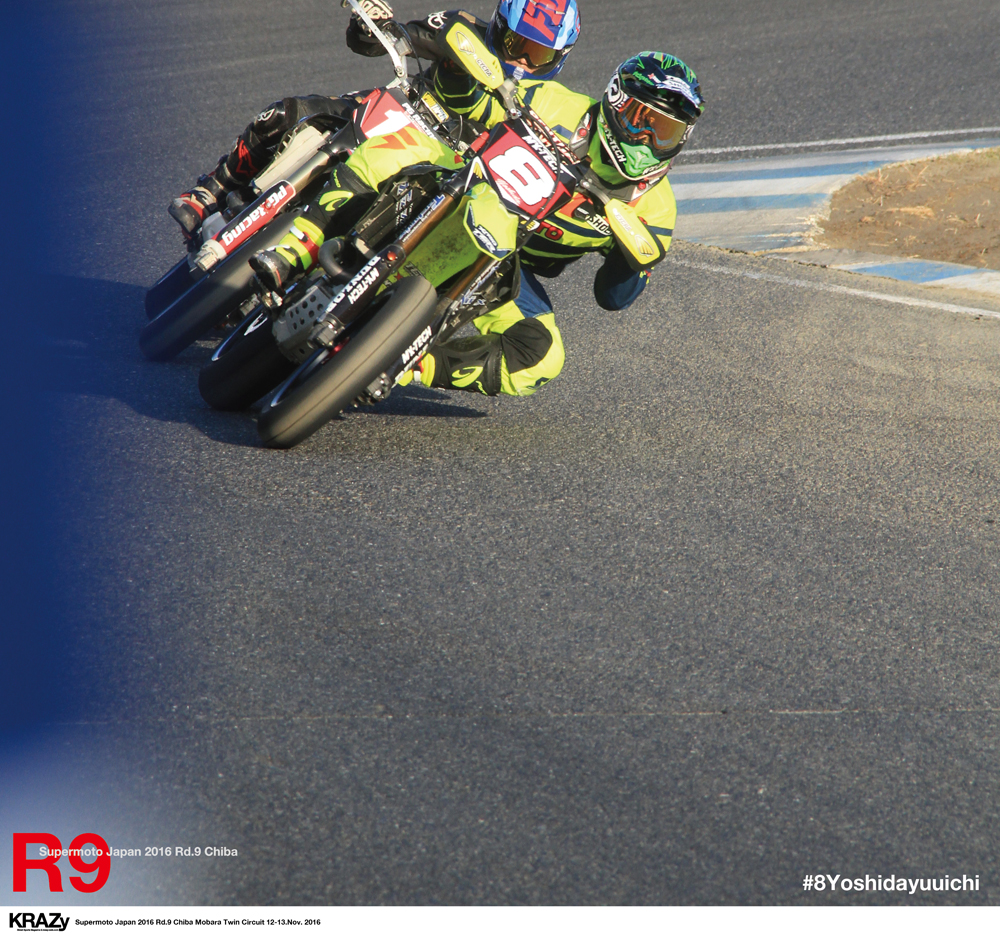 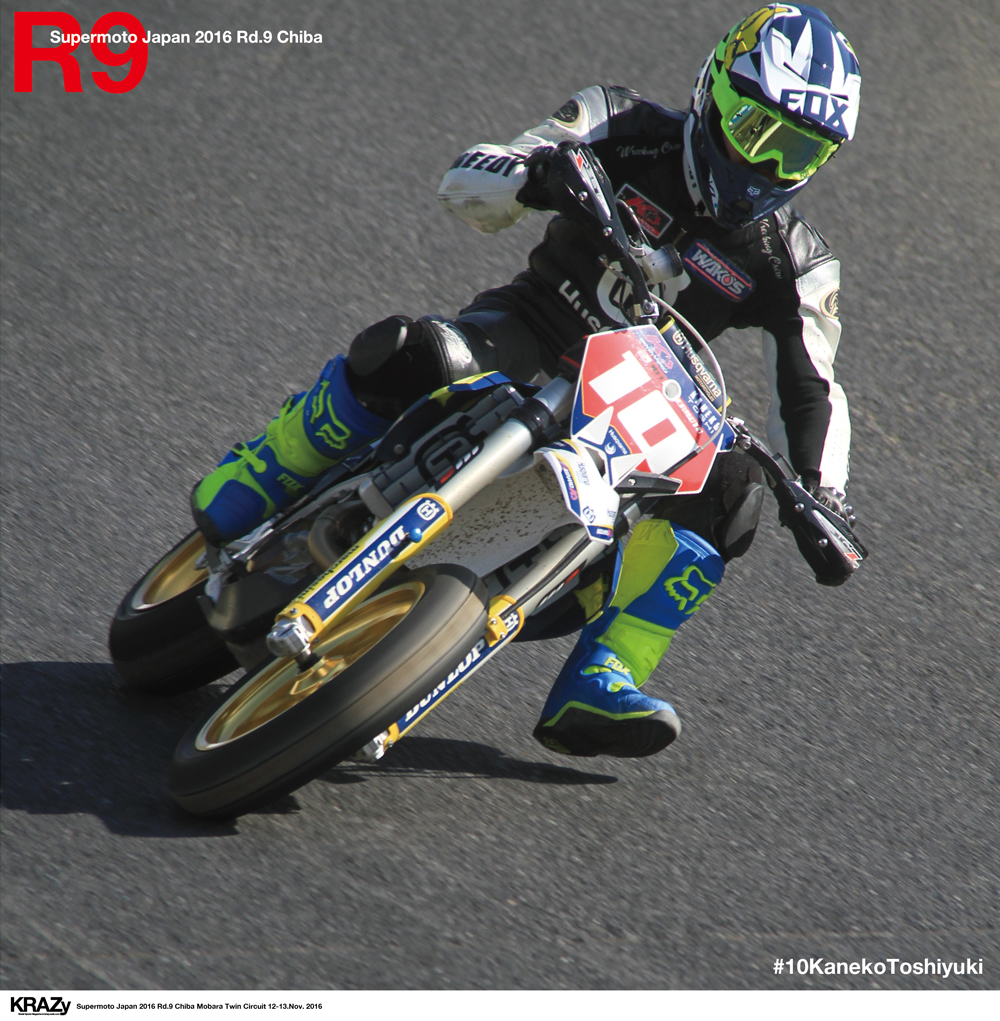 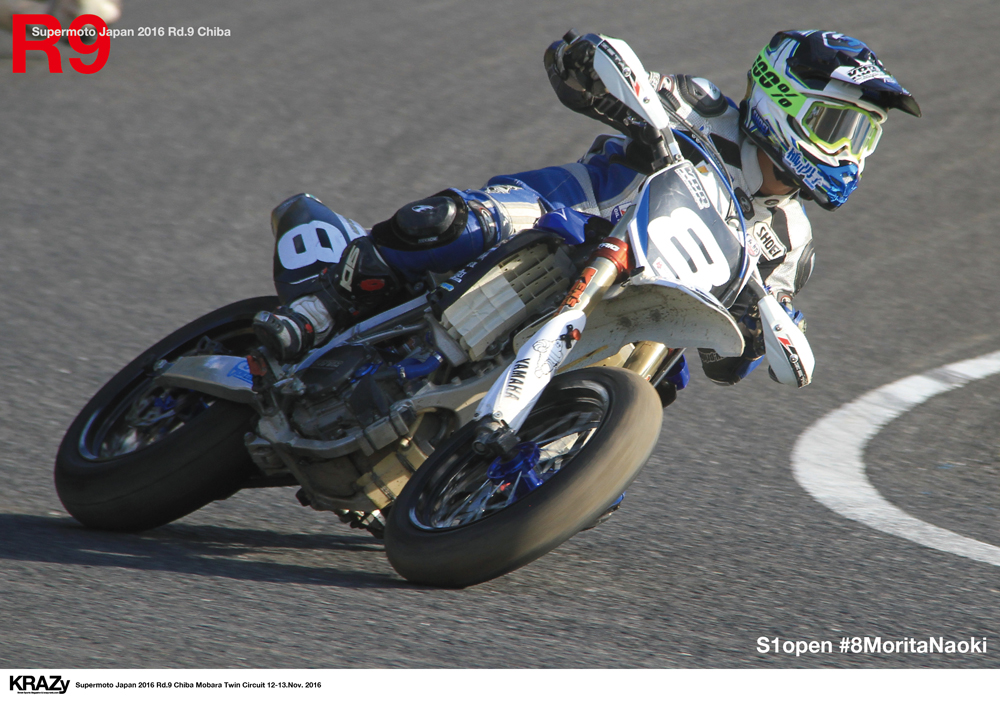 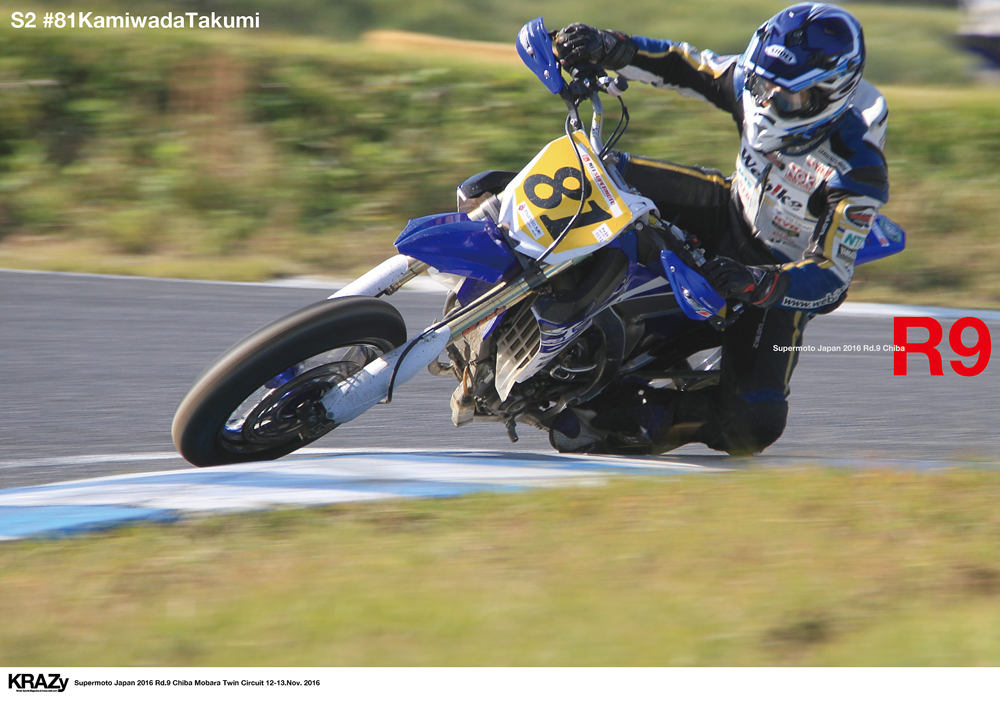 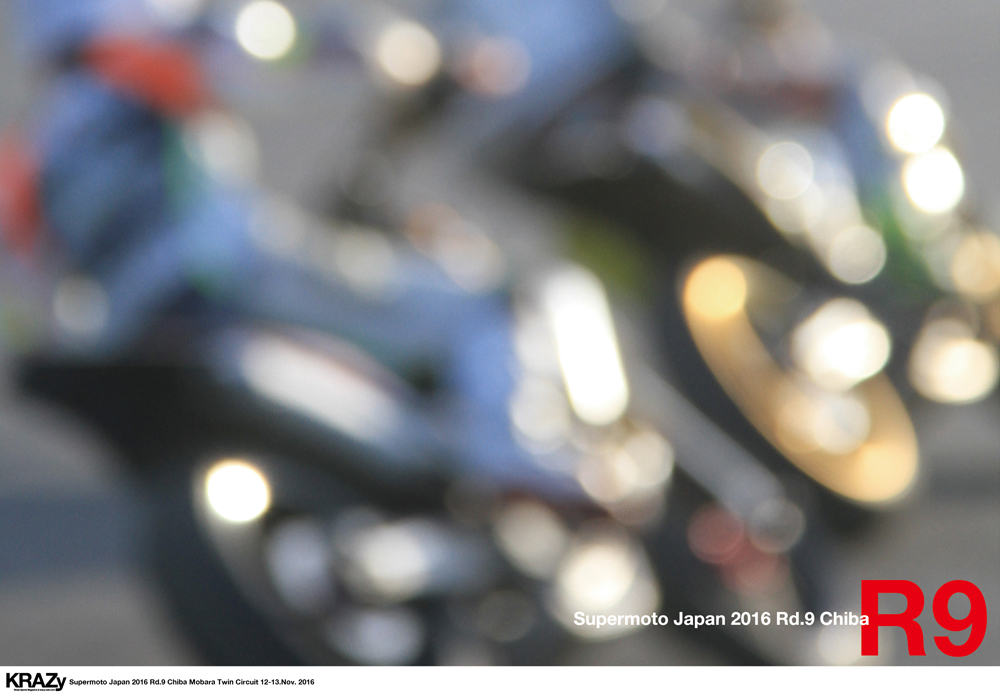 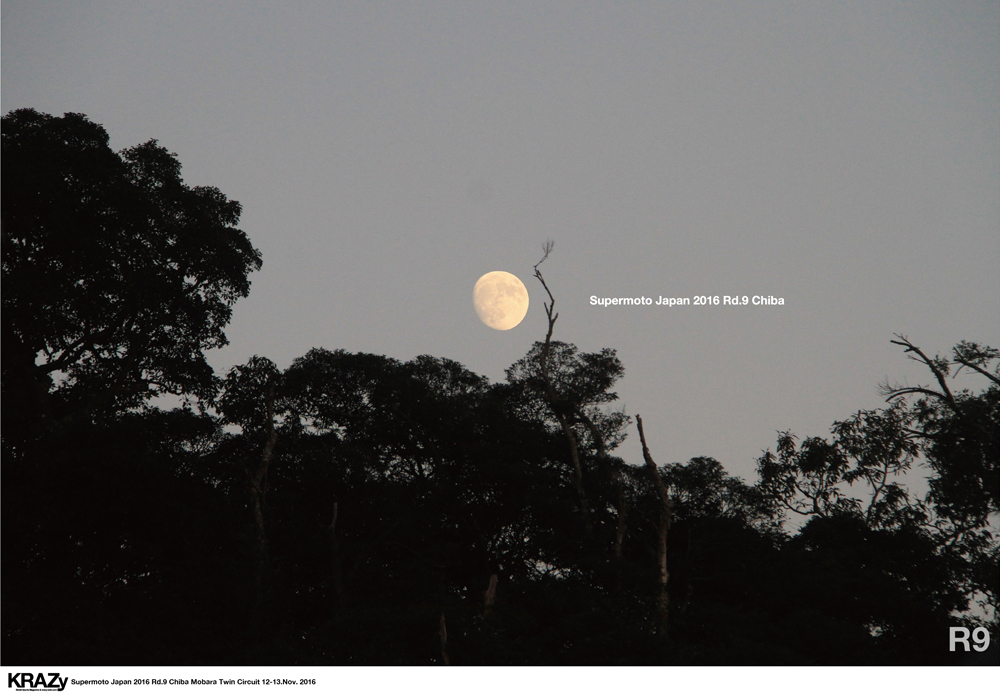 If you have any question feel free to shoot an email to kondo@kondo-design.jp
We here at “KRAZy” are particular about sending information.
We generate revenues from advertisements and the sales of goods because we want future motorcycle fans and future mortar race fans to look up this website.
It would be nice if you buy our merchandise once a year to help us continue this website.
We sell merchandise 4-5 times year online only.
We think the next sale will take place be in May after Golden Week.
Publication supervisor: Masayuki Kondo