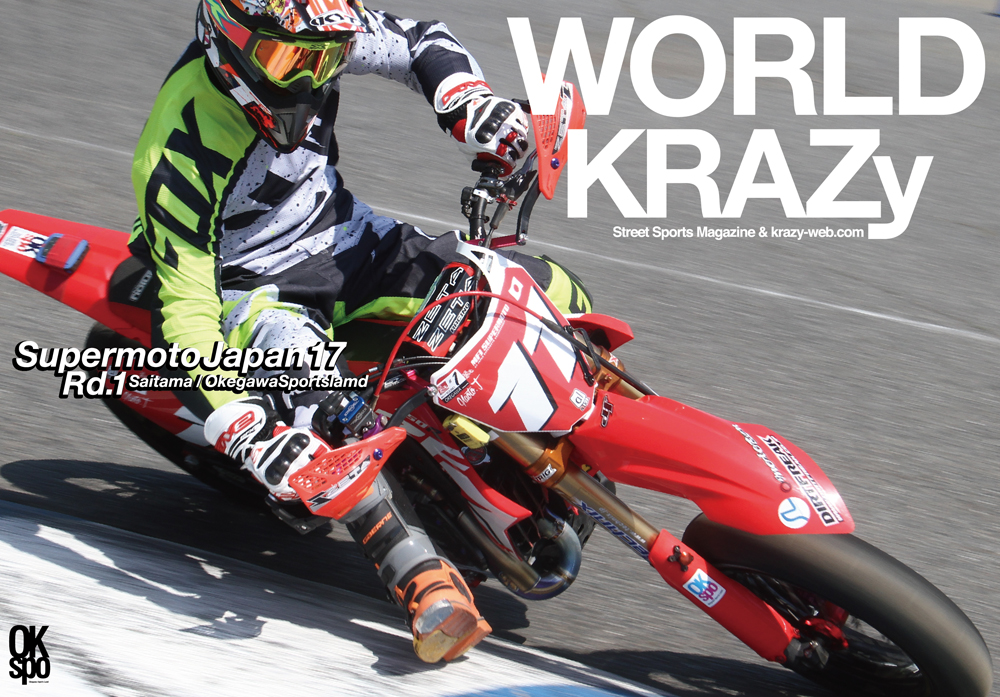 Supermoto Japan 2017 opened on April 29th and 30th.
The opening circuit was Okegawa Sports Land which is only an hour away from Tokyo by car.

The ten day period beginning on 29th is called “Golden Week” in Japan which is a string of holidays. A lot of people came, probably because of that. 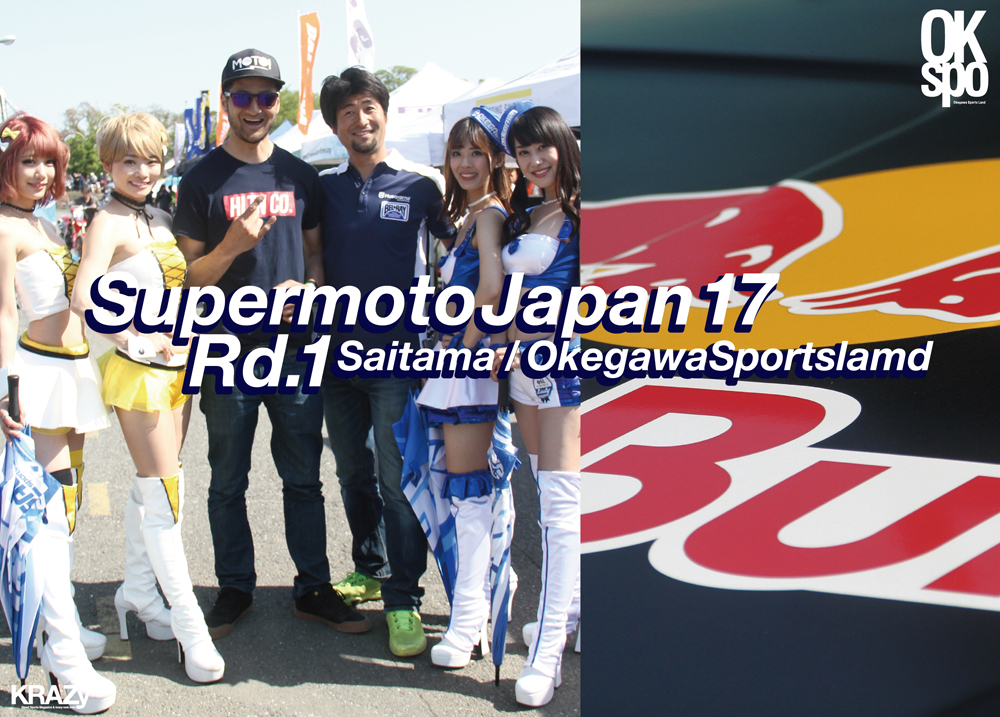 From the end of April to May the season is a beautiful fresh green, really soft and Japanese-like. Opening round was held on Sunday was sunny which was the best weather.

Many former riders and team participants came through because the opening round was held at the circuit near Tokyo. I was able to see old rivals. So it was a fun day for me too.

This is the top class where they use 450cc machines.

Unlimited engine displacement.
You can join S1 PRO class if you placed 3rd or better in the annual class series points ranking

250cc class. You can join S1 PRO class if you placed 3rd or better in the particular annual class series points ranking. 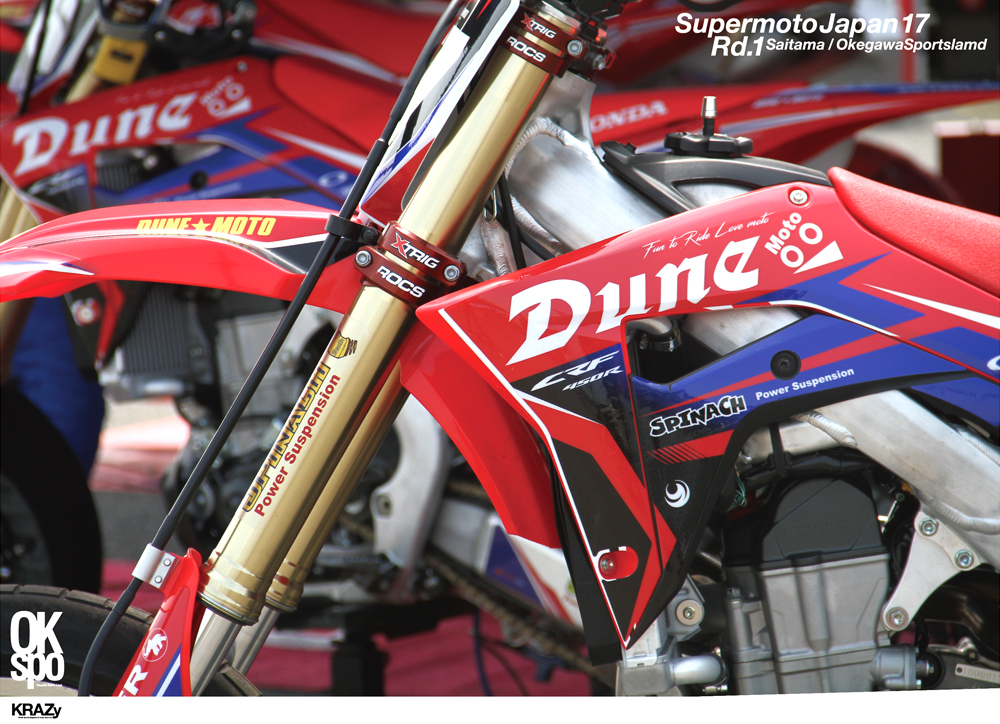 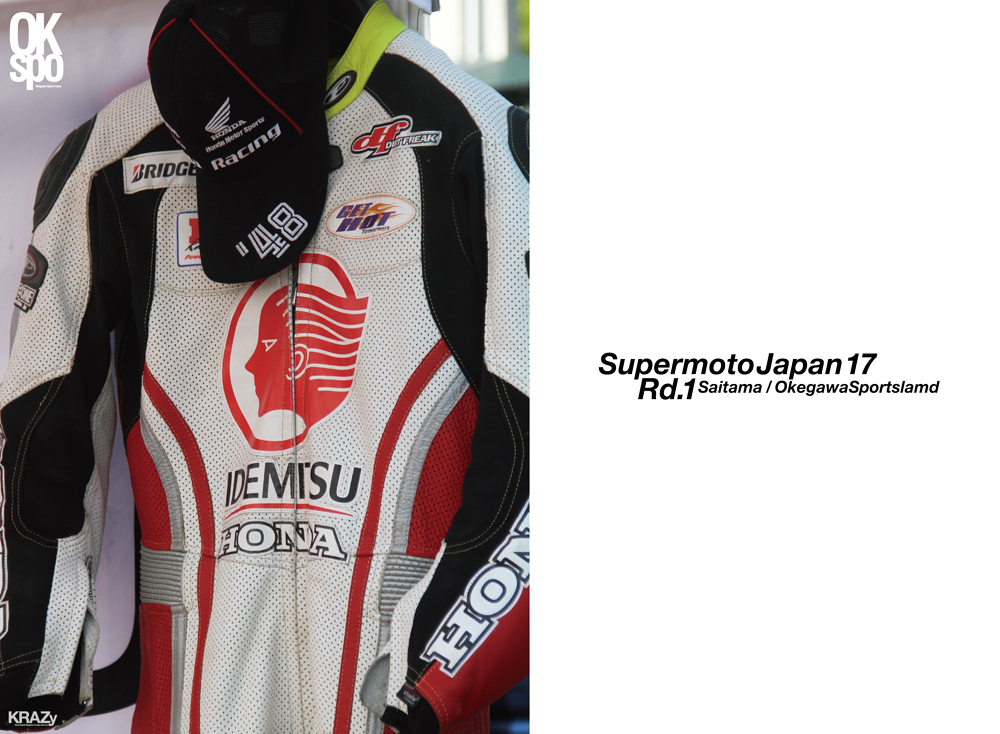 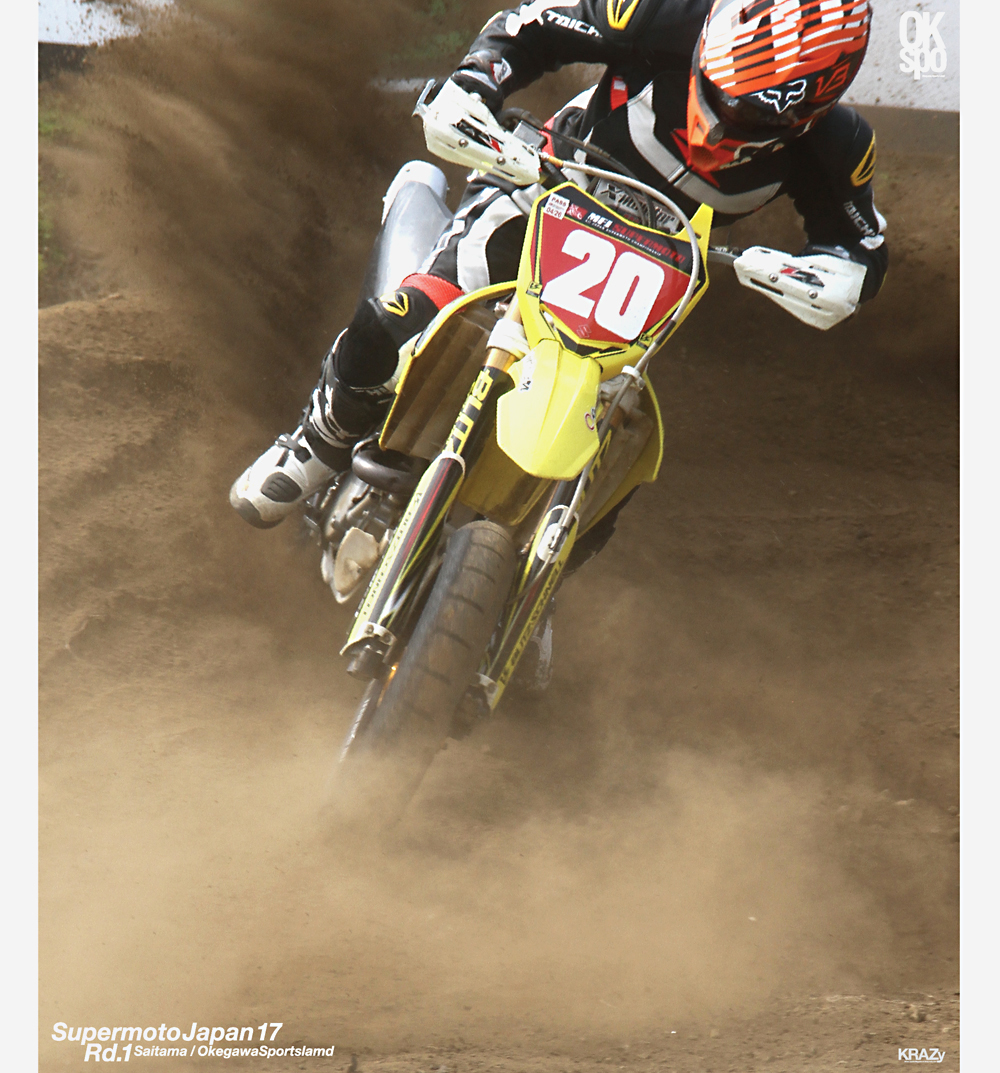 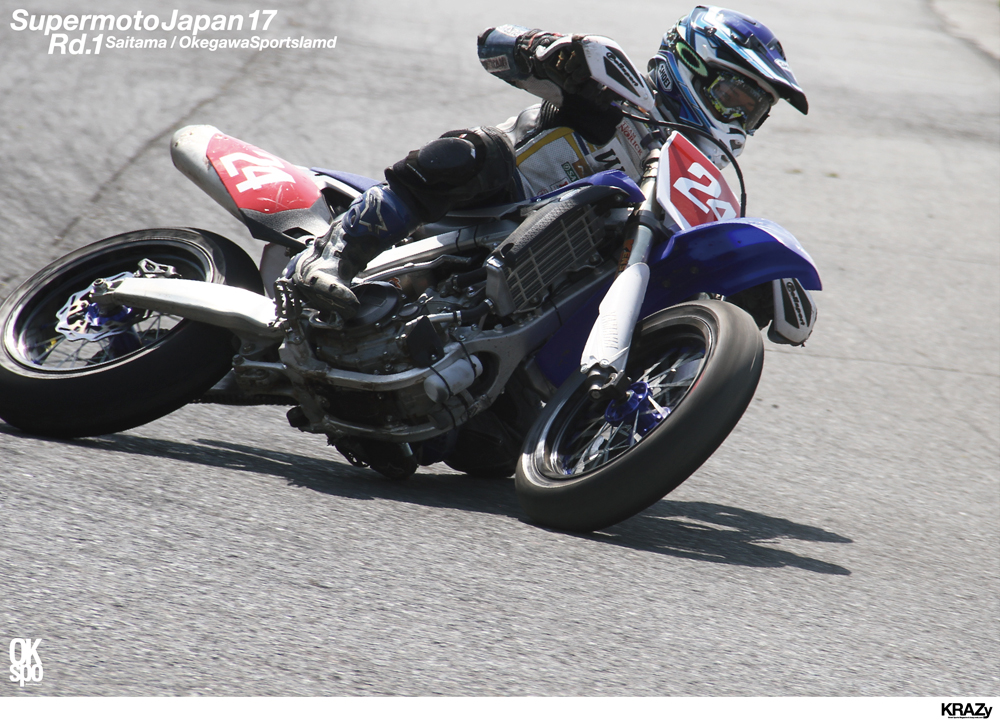 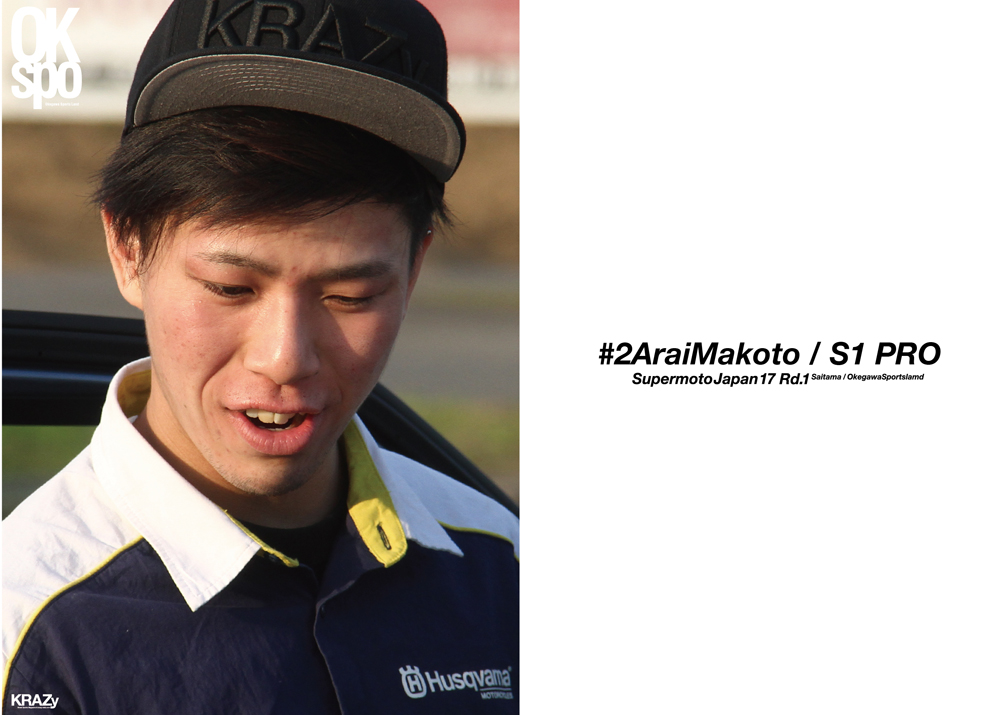 Let me introduce the must-see three riders to you. 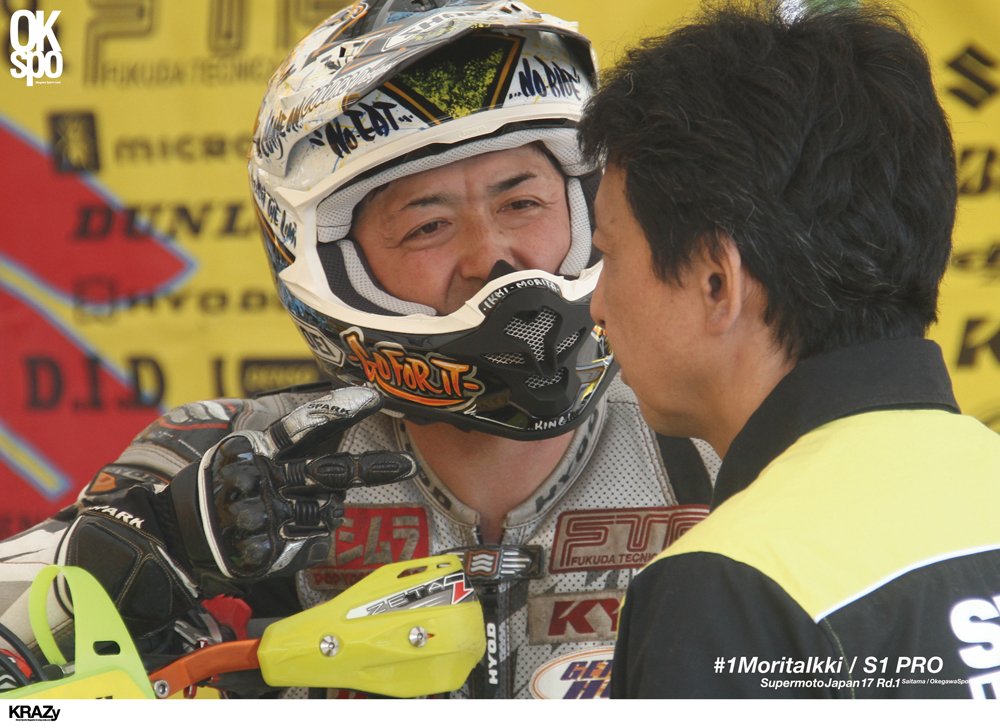 The previous champion is #1 Ikki Morita. He is good at starting. He often grabbed the holeshot even when he was the 3rd on the starting grid. He used to be a motocross top rider and came to Supermoto, so he has a lot of racing experience. 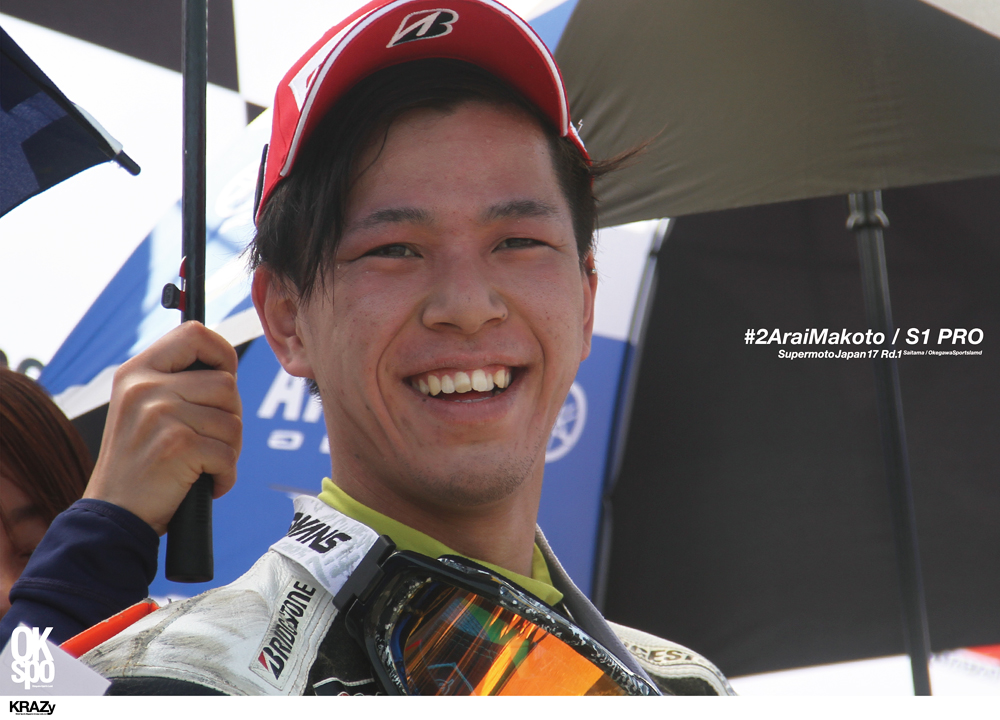 #2 Makoto Arai is a young rider, only 20 years old. He challenged FIM ASIA Supermoto last year. He grew up in this Supermoto. He ranked 2nd in the point total. 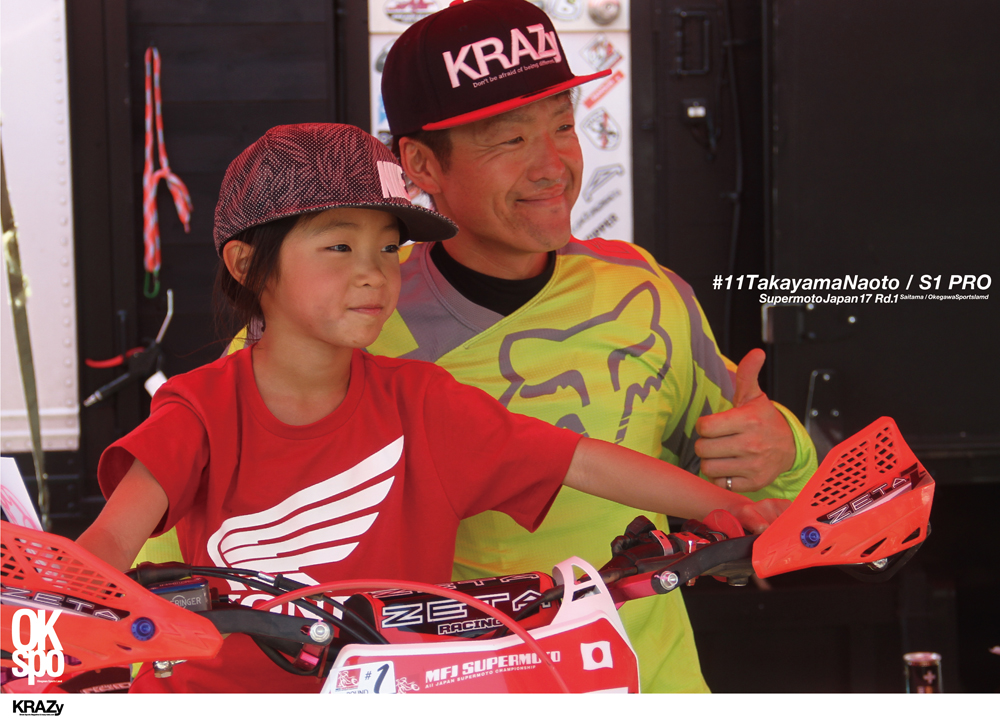 #11 Naoto Takayama is known for #300 (he is wearing #11 this year though) and popular in Hong Kong and Taiwan. He only participated in some races in Supermoto Japan. He won both race 1& 2 in the opening round last year. #11 Takayama doesn’t have much race experience because he started Supermoto after he became an adult unlike #2 Arai.

S1 PRO class / Race 1
This S1 PRO class race 1 is the main race in morning.
#2 Makoto Arai started from the pole position and won the race.
He grabbed the holeshot and held off an attack by #11Takayama and won the race .
He finally won the opening round this year after he lost the championship battle with #1 Morita last year and placed 2nd. 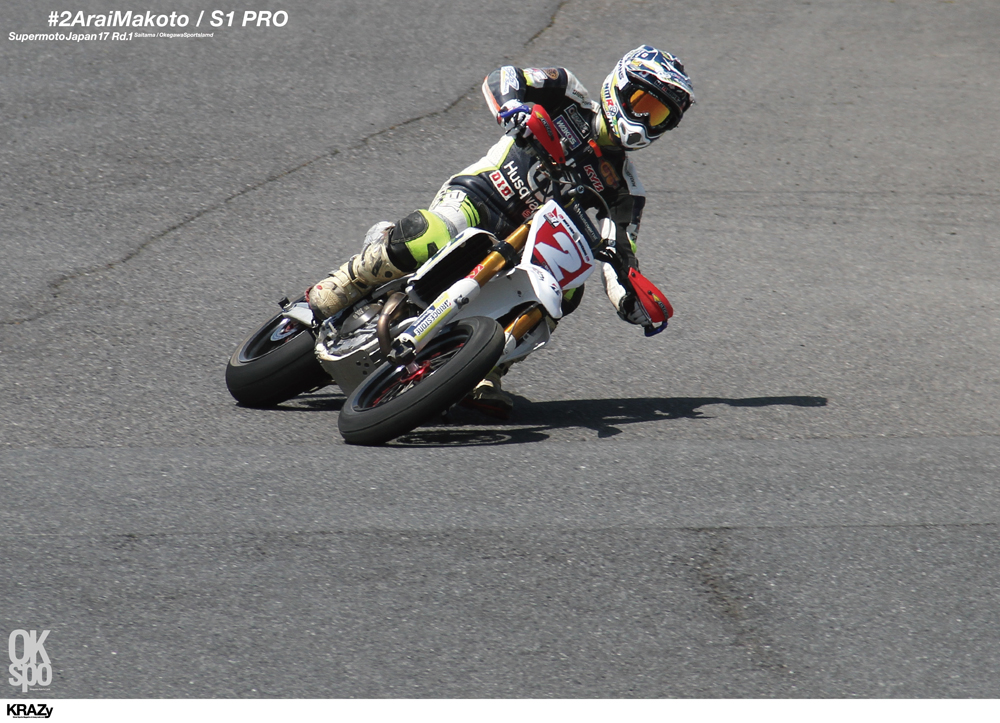 S1 PRO class / Race 2
The winner in race 2 is #11 Naoto Takayama who chased #2 Arai in race 1.
He started amazingly from 2nd on the starting grid, grabbed the holeshot and took the lead.
Takayama was attacked in the beginning by #2 Makoto Arai who won race 1.
But that didn’t last long.
Then the veteran #1 Morita showed up. In the end of the race he took 2nd place and started attacking Takayama.
In the last lap he made a move at the exit of dirt section but #11 Naoto Takayama was the one who came out of the last corner first. 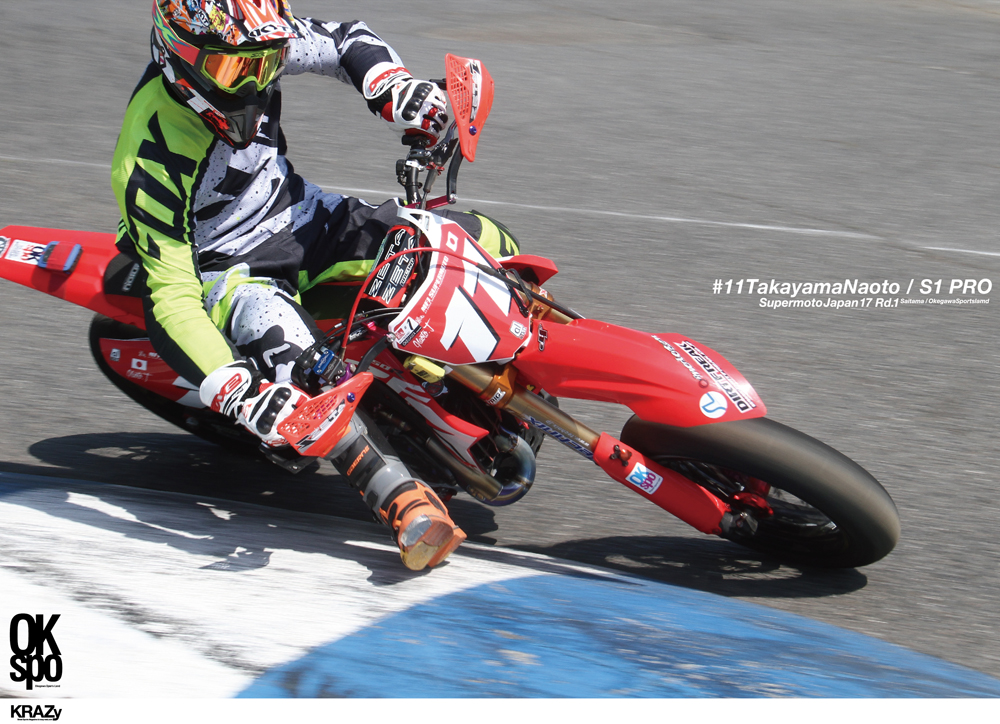 #11 Naoto Takayama told us,
“I’m really happy that I was able to win at my home circuit Okegawa.
I only participated in some races so I’m glad that I could turn out a good result despite having few chances.
I really want more people to get to know how fun Supermoto is.
I will keep doing what I’m doing in MotaFriends or Taiwan with that wish in mind. Thank you so much for today!”

The next round will be on May 20th and 21st at HSR Kyushu in Kumamoto which is home ground for Honda.

If you have any question feel free to shoot an email to kondo@kondo-design.jp
We here at “KRAZy” are particular about sending information.
We generate revenues from advertisements and the sales of goods because we want future motorcycle fans and future mortar race fans to look up this website.
It would be nice if you buy our merchandise once a year to help us continue this website.
We sell merchandise 4-5 times year online only.
We think the next sale will take place be in May after Golden Week.
Publication supervisor: Masayuki Kondo